Bitcoin (BTC): The Pullback is Nigh?

Needless to say that Bitcoin (BTC) has been the main, if not the only, newsmaker in the crypto industry over the past month as it has galloped to the upside by a stunning 37.8%, something that traders haven’t seen since the end of 2017. Needless to say that the Bitcoin dominance index has been on the rise since August. 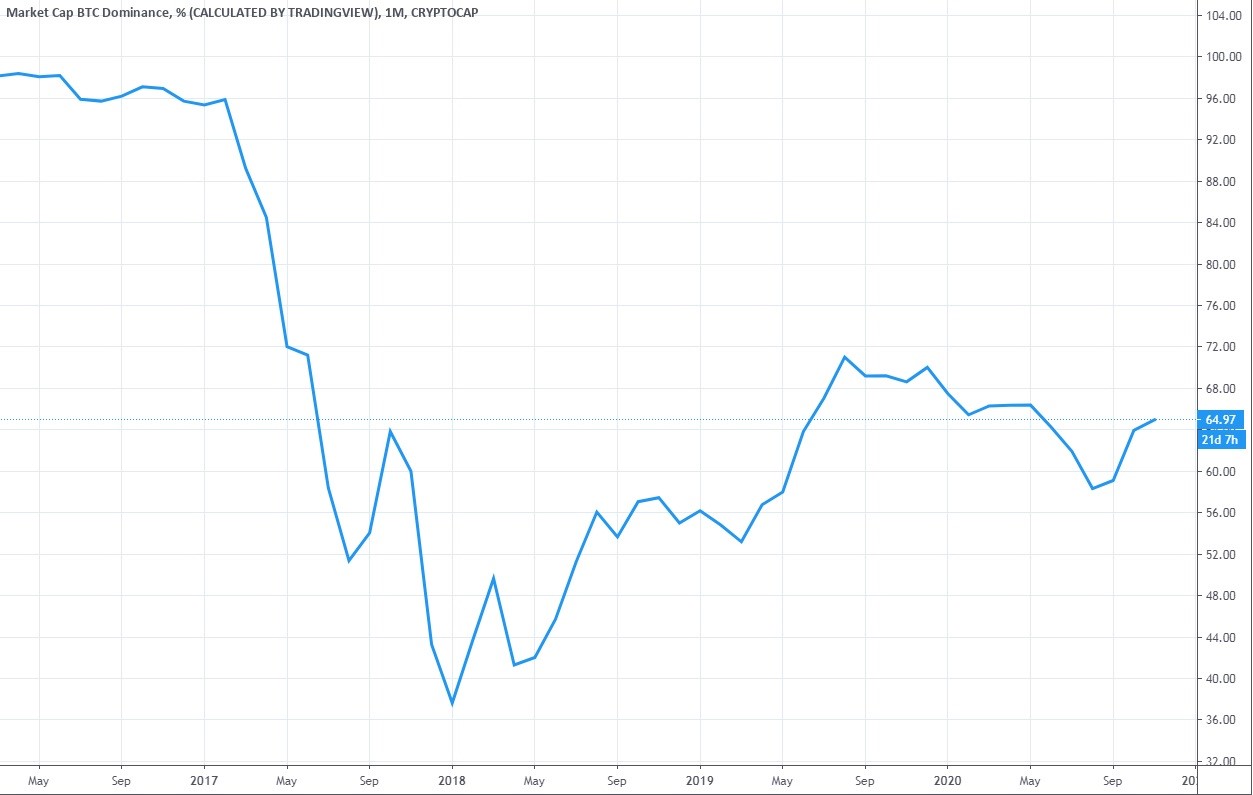 Over that period of time, the dominance has climbed upward from 58% to the current 64.9%, which has ultimately led to the cheapening of nearly all altcoins, especially the ones related to the over-hyped DeFi. In this episode of impressive bullish price action, BTC went smashing through the resistance levels from $12,000, so far stopping just a few dollars short from hitting $16,000. Nevertheless, the price has confidently made a new two-year high and is trending strongly to the upside on all time frames.

Will the Bitcoin market start to cool down soon?

However, such an explosive growth always leaves one wondering when the imminent pullback is going to take place. And when it comes to BTC, the pullbacks can be very significant - even on its way to the all-time high at $19,800, Bitcoin had a number of violent drops that amounted to 15% - 20% on a downswing. That’s the reason why even though the Bitcoin buying frenzy is still ongoing, as the bulls are defending the support at $15,000, the bears seem to be lying in wait to knock the price down considerably.

The first thing that hints at the approaching pullback is the visible decline of the Bitcoin hash rate, which is believed to be tightly correlated with the price.

We see a sharp drop from nearly 150 Ehash/s to the level below 100 E/s, followed by a recovery to 128 E/s. Also, we notice a gradual decline of transaction volume from 370 thousand transactions per day at the beginning of October to the current 240 thousand, along with the amount of BTC sent from wallets per day. This alone doesn’t constitute a BTC sell signal but provides us with a perspective beyond the action on the charts.

On the monthly time frame, BTC is pushing strongly to 78.6% retracement level on the Fibonacci grid, which lies at $16,200. Given that the price often forms long upper wicks when encountering a Fibonacci level, the close of the next monthly candle could be at $17,200, unless BTC initiates a pullback sooner. 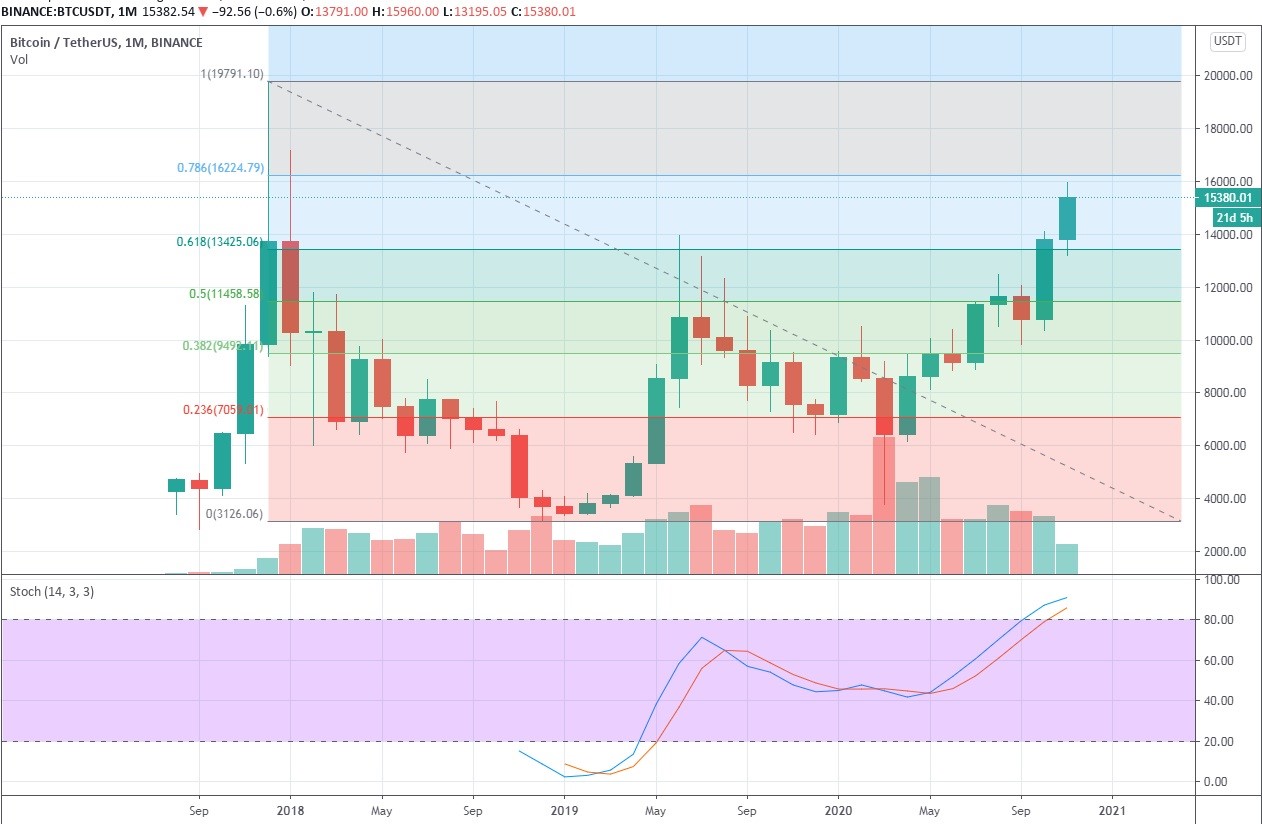 On the weekly chart, this week’s candle has opened at the same level as the previous one, while the bulls were unable to push above last week’s high at $15,955. 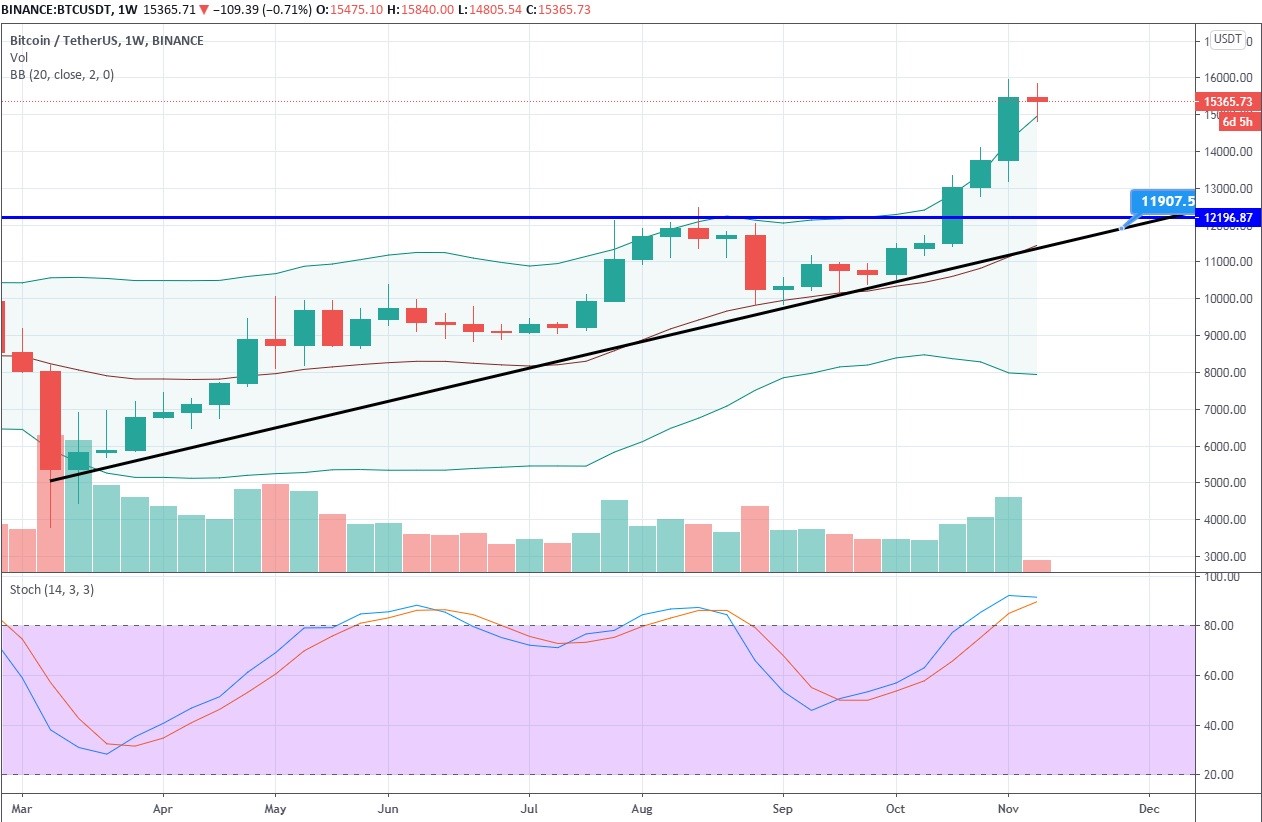 The price has pierced through the upper band of Bollinger Bands, which is also a strong signal that traders stopped buying BTC and might want to lock-in the profits, forcing the price to drop to $12,200, a middle line of Bollinger Bands, or even to the diagonal support at $11,900.

The daily chart reveals a descending triangle, a bearish pattern, with the support at $14,800. 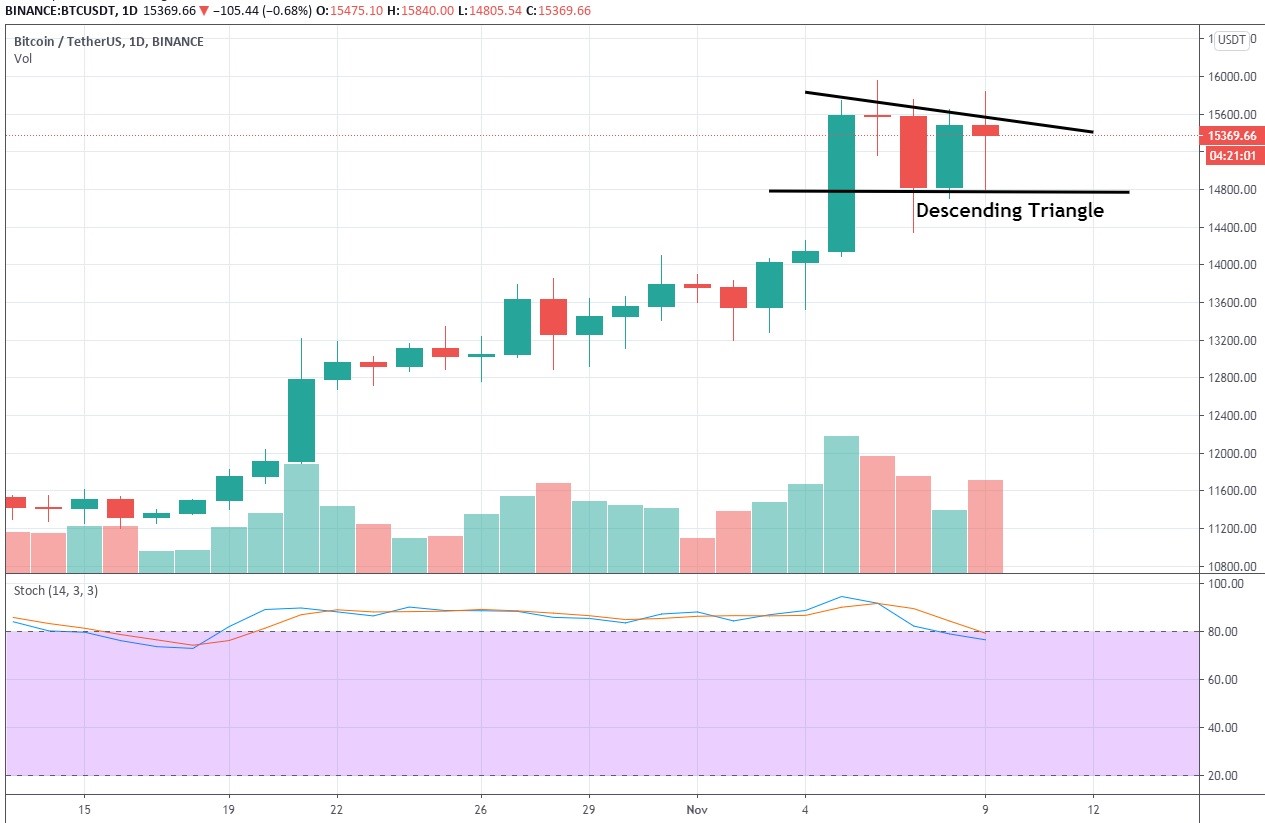 The declining trading volume with the predominance of selling activity also suggests that the rally might be running its course. Finally, Stochastic has crossed into the neutral zone to the downside, signaling that the momentum has shifted to bearish.