The event that miners, traders, investors, and cryptocurrency enthusiasts have been waiting for is finally at our doorsteps - the havling is just a couple of days away, and its outcome is going to decide the behavior of the crypto market for the months to come. In a nutshell, the consequence of mining the next 210,000’s block, which is the condition for halving to occur, is going to be the reduction of block reward from 12.5 BTC to 6.25 BTC per block. Consequently, the supply of BTC will decrease, which will inevitably lead to the rise in demand - deflation - and the price increase since that is the most fundamental law of economics.

There is no need for a profound analysis to arrive at the conclusion that halving puts Bitcoin in the bullish context long term, a year or even more, because of the following reasons:

Bitcoin’s price action after each halving

From this perspective, Bitcoin is gearing up for entering a protracted bull market right after the halving event, the result of which could be BTC increasing in value by at least 1000%, which means that by the end of that cycle, the first cryptocurrency could be worth around $90,000.

Bitcoin is regaining its dominance at a rapid pace, starting from mid-February when the BTC dominance was at 62, the lowest since July 2019. We reckon that the dominance will continue to rise post-halving and exceed 72 by the end of June, rendering even the slightest hopes for an altseason obsolete and making the entire market totally dependent on the BTC’s behavior again.

However, we do take other factors into account, which could have a profound effect on the price of Bitcoin after the halving. Firstly, the COVID-19 pandemic is far from being suppressed, and a probable second wave could easily put the nascent bull rally in a chokehold.

The traditional markets are being fueled by the unprecedented infusion of liquidity, courtesy of the US government, while the real economy is in ruins. But the consequences of the lockdown will catch up with financial markets in the second quarter, hampering the cryptocurrency one, and Bitcoin in particular, by association. 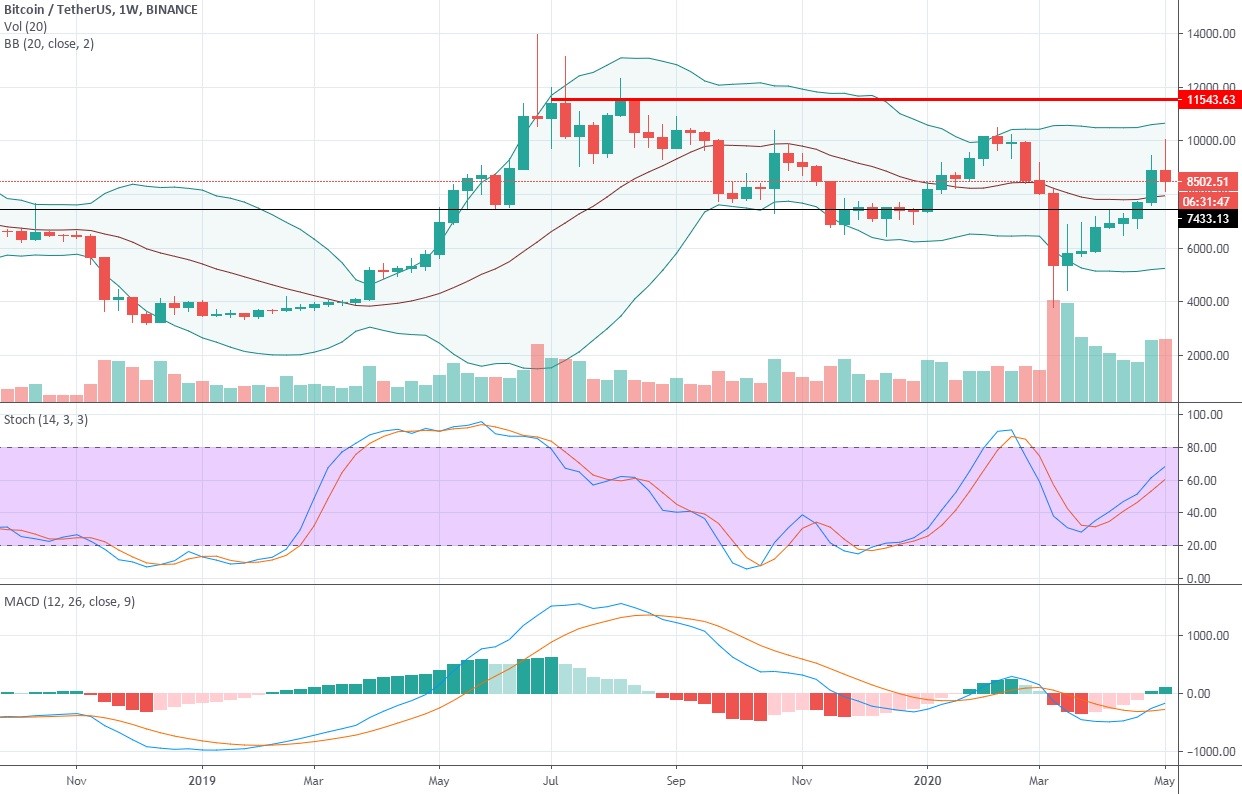 Therefore, we predict that in the next four to eight weeks, traders shouldn’t expect an explosive price action on the part of Bitcoin, although both crucial indicators: Stochastic and MACD are quite bullish, the former is confidently moving to 80 while the latter has only recently performed a bullish crossover and is now aiming for the zero and the bullish territory above it.

In summary, traders need to realize that presently there is very little long money in the market, so the speculators could relatively easily push the price to the downside if required. $11,500 is an absolute maximum which Bitcoin could reach during the aforementioned period, after which traders should expect a brief rollback to $8500, or the middle line of Bollinger Bands.