Upon reaching the multi-month resistance at $12,500, the buyers were unable to push Bitcoin (BTC) higher, the struggle which translated to the bearish pinbar candlestick that ultimately led to a large 19% drop at the beginning of September that took the first cryptocurrency back to the macro support at $10,000. 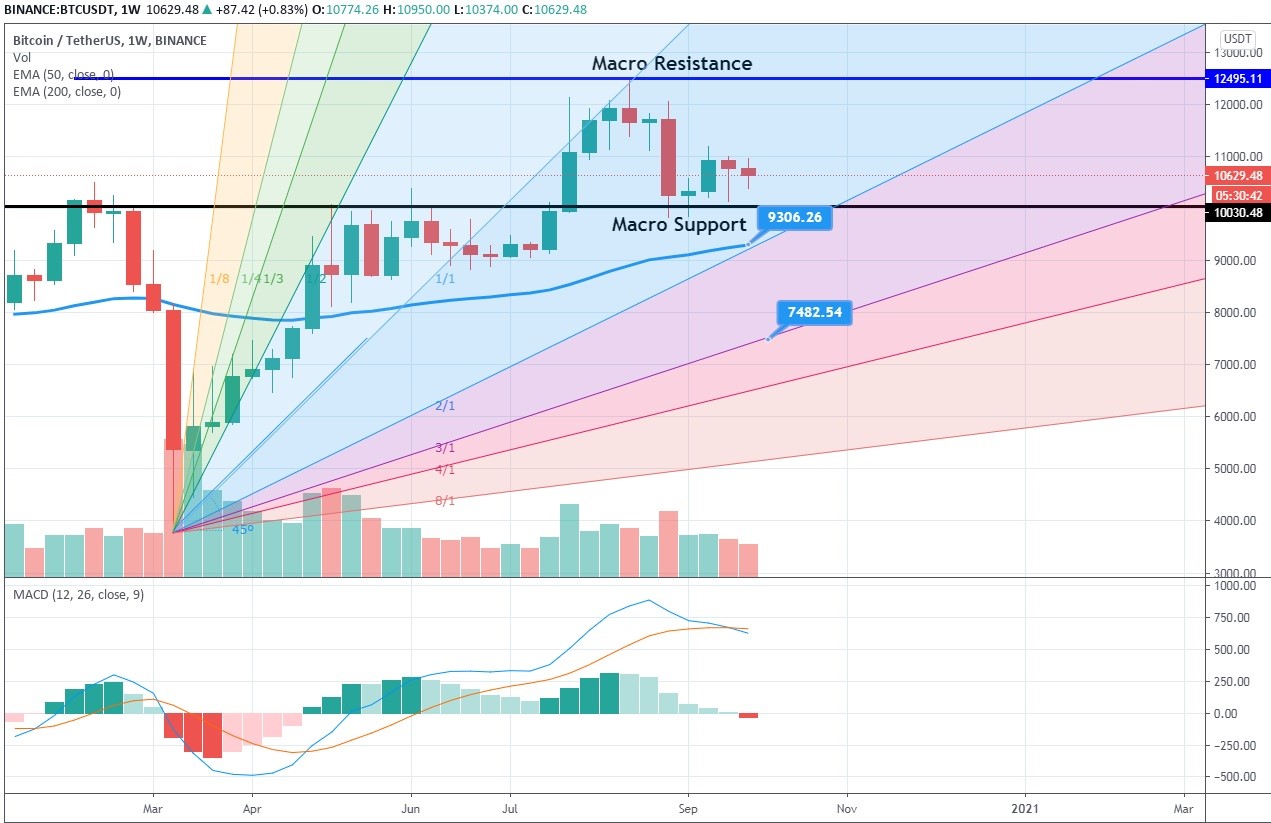 The failed breakout kept BTC range-bound, a continuation of the largely unimpressive performance during the second half of 2020 on the part of the forefather of all cryptocurrencies. At the same time, the Bitcoin dominance kept on sliding down from 67,11% seen during May to the current 57,9%, while the capitalization of altcoins has been climbing up steadily from 14% to 16%, incentivized by the recent DeFi boom. 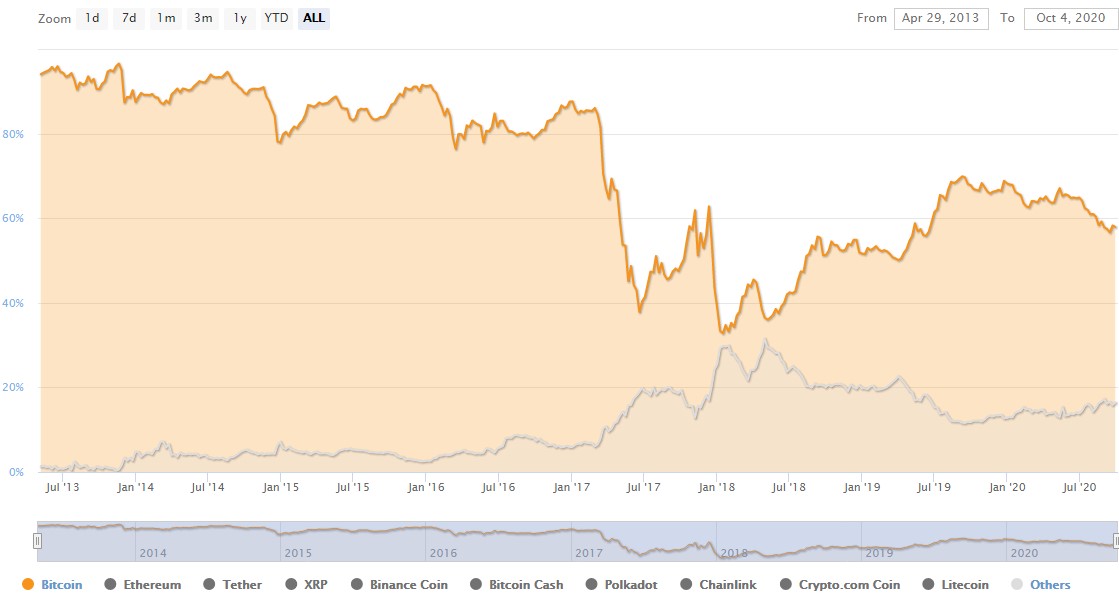 Bitcoin’s inability to put up any serious gains in the past six weeks came on the back of the increase in hashrate that reached the highest point in the network history at 151 Ehash/sec in the middle of September but then rolled back to 123 Eh/s. Right now, the hashrate is again on the rise, standing at 145 Eh/s.

It is customary for the Bitcoin price to receive appreciation when the hashrate grows, but the present discrepancy might hint at the underlying weakness of the buyers, which would consequently leave Bitcoin either ranging between the macro support and resistance levels or drop below $10,000 that, in turn, could exacerbate the selling activity.

We applied the Gann Fan on the weekly chart to determine the possible support levels during the anticipated slide to the downside. Interestingly enough, the first such support turned out to be converging with the 50 EMA that currently runs through the $9,300 price level. Therefore, if the drop turns out to be of non-aggressive nature, we expect $9,300 to serve as support during the next month. But should the buyers prove unable to hold above the 50 EMA, BTC will ultimately travel south to $7,800, hence get back to the March price levels.

The prediction regarding the approaching fall below the macro support is backed by the showings of MACD on the weekly time frame, where we see a clear-cut bearish crossover, the first one since the infamous market meltdown in March. This allows us to consider the combination of a bearish pinbar, and the engulfing candle that followed, as well as the MACD crossover, to be a strong indication of a trend reversal, which is going to be fully confirmed once the price dips underneath the macro support. 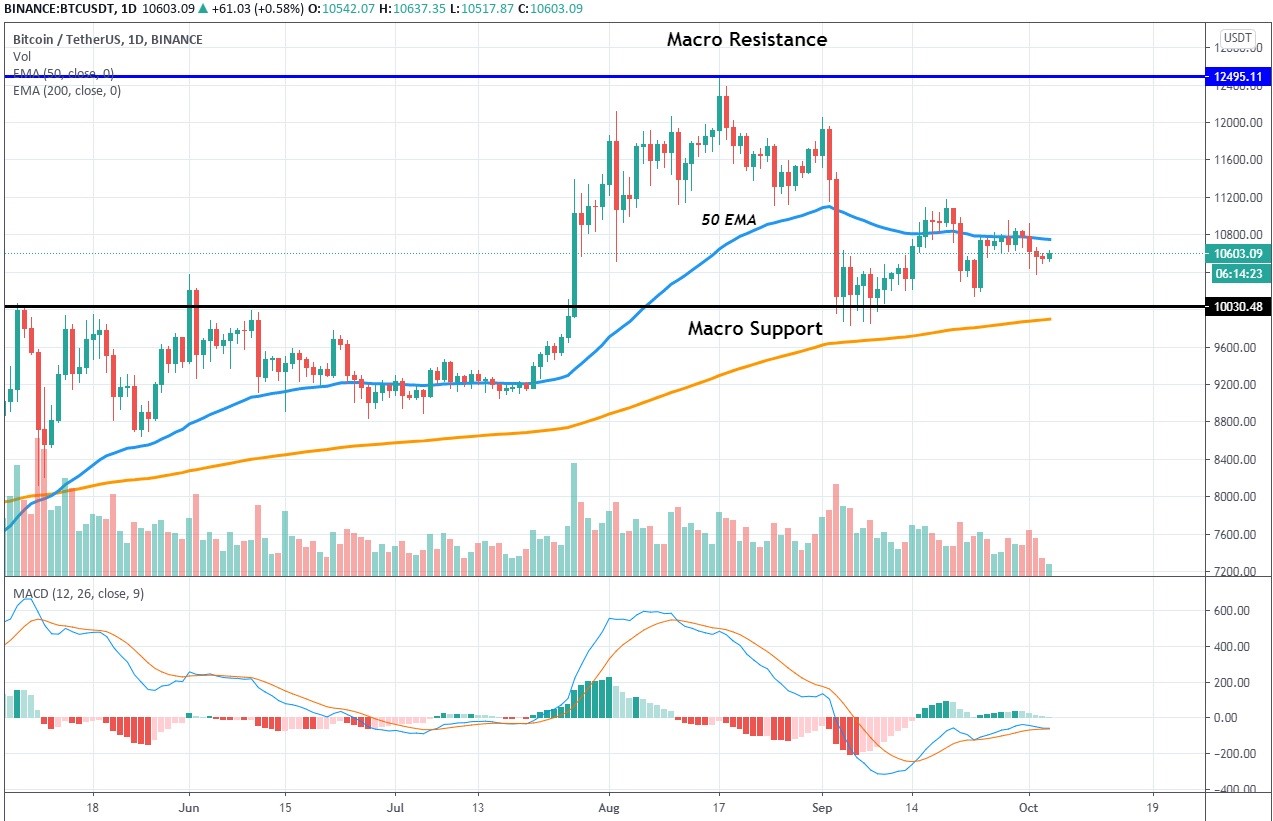 For more immediate price action, we are going to analyze the situation on the daily time frame. Here we see how Bitcoin is struggling to climb above the downward-looking 50 EMA on the backdrop of diminishing buying volume, which only suggests that the buyers’ attempts are most likely to be futile, specifically if MACD dips to the downside. Here we predict that BTC will bounce between $10,000 and $10,800 for seven to ten days and then take a dip below the 200 EMA in the direction of $9,600.