The parent cryptocurrency has been gradually losing its dominant stance over the last month and a half as the alts continue to gather strength. Whether it would mean the beginning of the fully-fledged altseason, like the one we saw in 2017/2018 when alts had been gaining massively across the board, or eventually turn out to be just a bull rally, there is no denying the fact that Bitcoin, along with other cryptocurrencies, is gearing up for yet another bull market.

This time around, the upward price movement will be incentivized by the approaching halving that will occur on May 12 and cut down the miner reward from 12.5 to 6.25 coins. Therefore, regardless of how altcoins would behave within the designated period of time, Bitcoin will keep soaring, probably not at the fastest possible rate, especially if the altseason does get into full swing.

Golden Cross as a harbinger of the bull market

But it’s not the fundamentals that occupied the minds of traders this week, but the bullish breakout pattern called a golden cross, which emerged on the daily BTC charts. For your information, the golden cross is considered to be a very distinctive bullish signal that is formed when a relatively fast moving average, in our case, it’s the 50-period MA, crosses the slow, or long-term, moving average, usually the 200-period one.

This significant bullish indicator emerged on the charts on February 18 and was reinforced by the relatively heavy trading volume, which adds more weight to the probability of inception of a prolonged and robust bull market, similar to the one that occurred in 2017.

Moreover, since the beginning of 2020, the price of Bitcoin has been moving in the upper part of Bollinger Bands, constantly bouncing off its middle line, which usually means that the bulls are exercising control over the market.

However, Bitcoin is still moving in the dangerous proximity to a crucial support level at $9100, breaching, which could catalyze a very steep correction to the levels of $8200 or even $7700. And even though Bitcoin dominance is currently experiencing a substantial decline, having dropped from 71 to 62 in a matter of five weeks, it still shows signs of recovery, which is probably one of the reasons why the price growth of altcoins has been halted for the time being.

But the entire crypto space seems to have a very bullish outlook, regardless of the current pullback to $9500, and the fact that Bitcoin struggles to go past the $10500 area, which it had already tested twice. 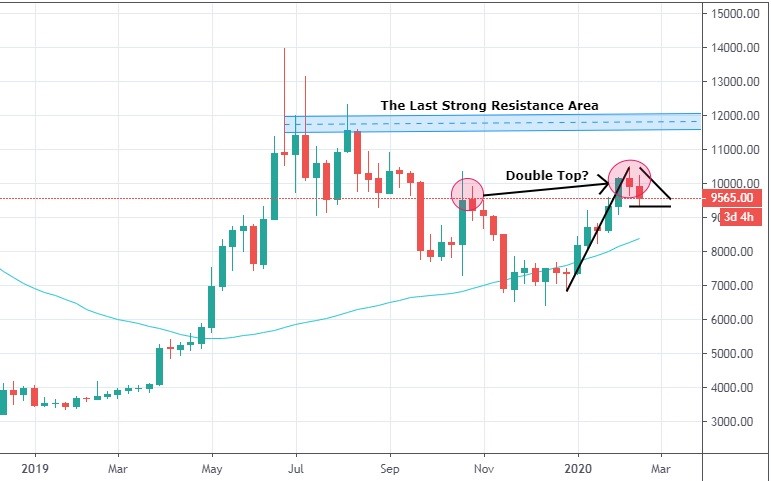 To confirm its bullish intentions, Bitcoin needs to reach and breach the crucial resistance area between $11500 and $1200. By doing so, the founding father of all cryptocurrencies would erase all doubts about the bull market. The price could travel to the said level after successfully executing the bullish flag formation that it is currently building to the upside. But traders should also pay attention to the possible emergence on the double top pattern that would be partially confirmed if the bullish flag gets broken to the downside. To summarize, traders should approach BTC with a certain degree of caution until it fully confirms its bullish intentions.