Binance Coin once again sees its price beginning to grow in the final days of 2019. Currently, the coin sits as the 8th largest cryptocurrency, with a market cap of $2.1 billion and a price of $13.73 per coin. BNB rose by 1.95% in the last 24 hours, after its recent drop was stopped by a strong support at $12.

As always, the most important question for traders and investors is — what will happen to it next?

Before we can see where BNB might go in the near future, it is important to see how the coin performed in the past. The fact that its history is not too long is a good and a bad thing alike. It is good because it is easier to spot certain patterns, but it also doesn't provide us with too much information, meaning that it is impossible to know whether or not the patterns would stick.

For example, BNB surged significantly back in early 2018, as a consequence of it joining in on BTC's bull run. While BNB was a bit late to the party, it still managed to skyrocket from $1.24 to $24 in a single month.

After the bull run ended and the bear market settled in, the coin sank, yes, but it didn't lose nearly as much as other altcoins. In fact, after a single month of dropping, its price spent as much as half a year growing. In other words, while every other altcoin lost around 90% of its value, BNB recovered more than half of what it lost during its initial nosedive.

Of course, as 2018 dragged on, even BNB eventually succumbed to the crypto winter's negative influence, eventually sinking back to its strongest support at the time — $4.50. 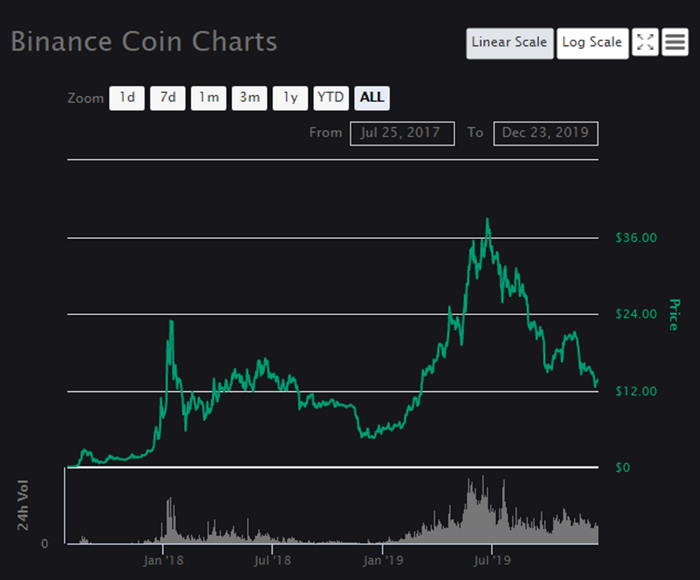 The coin's performance repeated in 2019 at a significantly larger scale, where BNB surged from $4.50 to over $36 over the course of six months. When the bull market ended in late June, BNB started dropping once again. Once more, his drop was stopped by a strong support, only this time, that support was at $12.

The future of BNB

From everything mentioned above, the simple conclusion is that BNB might surge higher and higher each year, and that each drop that comes in the second half of the year will stop at a higher support level. Now, this is by no means a strict rule, and BNB could easily spend the entire 2020 in a free fall. However, that is always a risk with cryptocurrencies.

They are not regulated, they have no real-world asset that would secure their value, and they are only as valuable as people believe them to be. With that said, Binance Coin does have a number of use cases within Binance's ecosystem, which is a guarantee of its value and success, for as long as Binance itself remains a respected, leading exchange.

For now, BNB is once again rising in another period of recovery that seems to be including the majority of the altcoins. If the last year is anything to go by, this recovery likely represents the beginning of new growth that will potentially lead some coins up early, while others might join at some point in early 2020. However, the holiday season might also interfere with the current development, so the only certainty right now is that there is no certainty, which is a common theme in the crypto industry.