Binance Coin (BNB) started this year in a very positive way. It decoupled from Bitcoin, it started carving its own path, and Binance's moves made the coin's price and trading volumes grow rapidly. However, somewhere along the way, the coin lost its initial momentum. While its use cases still remain the same as they were in the first few months of the year, BNB has experienced significant losses in the second half of 2019.

The main question now is what is next for BNB? Can it recover relatively soon, continue to drop, or maybe stay where it is? This is what people around the world wish to know, which is why we will try to give them an answer. Of course, no one knows the future of any crypto, and all of it is just speculation based on what is known so far. However, there are some conclusions that can be drawn from the coin's performance up to this point, so let's take a look at its past, first.

Binance Coin was launched in July 2017, which was just at the right time for the coin to start attracting attention. It was born during a very successful period in crypto history, which allowed it not only to survive, but also to take off rather quickly.

One important thing to note is that pretty much every other cryptocurrency that existed at the time saw its ATH during December 2017 and January 2018. BNB, on the other hand, reached its ATH way later, despite the fact that it witnessed this bull run.

Of course, that doesn't mean that it did not participate in it. On the contrary, it did reach quite a decent price, almost going all the way up to $24. This was a huge resistance for BNB, and it prevented the coin from progressing further when it peaked at $22.76 on January 7th, 2018. When the market crashed, BNB dropped down to $8. However, while it did lose nearly two-thirds of its price, it was still significantly higher than it was in November 2017, when its price started growing from $1.3.

In 2018, BNB grew throughout the year, although very slowly and the highest it went was $17,25, on June 7th. After that, it started dropping once more, suffering a major crash in November 2018, just like the rest of the crypto market, when BCH hard fork incident took place. 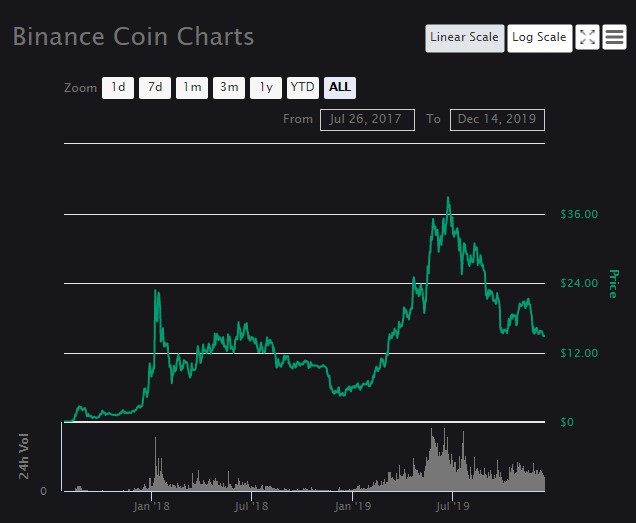 Then came 2019, Binance returned its Binance Launchpad, it started launching fiat-to-crypto subsidiaries overseas, and it even launched its own blockchain, DEX, and more. BNB was thriving due to new demand, mostly because of the Launchpad and the ability to participate in the new token sale model, IEO.

These events even allowed it to decouple from Bitcoin, and become the best performer in early 2019. The rest of the market caught up between the months of April and June, when BTC started leading altcoins from one mini-bull run into another, and BNB joined the trend, once again falling under Bitcoin's influence.

The coin even reached an entirely new ATH, hitting $38.82 before the bulls withdrew and correction took place. Since then, BTC kept dropping, and BNB followed its lead, which led it to its current price of $14.83.

What will happen to BNB in the future?

BNB is unlikely to see a sudden surge in the remaining two weeks of December 2019. The coin is also still pretty young in order for us to have enough information to accurately predict its performance during 2020. However, we have witnessed its performance during the past two and a half years, and BNB seems to be following its own pattern.

It usually grows for the first half of the year, which is followed by a drop in the second half. This was witnessed during the crypto winter of 2018, when it climbed up until June, only to start dropping until December. The same happened in 2019, and many presumed that the coin is simply under Bitcoin's influence once more.

This may be the case, of course, but it might be BNB's own pattern, as well. Judging what we have seen so far, BNB might start growing again in 2020, at least until the first half of the year, when it might even reach a new ATH. After that, it will start dropping, if the pattern holds, likely ending the year with its price a bit lower than the half of its highest point. For now, this remains only speculation, although it is possible that the coin's movement so far is no coincidence, and that the events might play out like this, if nothing impacts its performance from the outside.