Over the past year, Binance Coin has earned itself a status of the most popular exchange token as it was climbing up the ranks ceaselessly, adding 98% to its value during the said period. The breakthrough for BNB happened mainly thanks to the tireless marketing initiatives on the part of its CEO Changpeng Zhao, as well as an incredible amount of work that has been done by the entire company to broaden and improve the existing infrastructure.

The positive efforts by the Binance team continued into 2020 - the platform now features an option to buy crypto with multiple fiat currencies, their futures program is evolving, along with the decentralized exchange. The price of BNB, as well as traders who keep this coin in their portfolios, appreciated these developments as the coin continues its way up to the all-time high of $39.45, with only 51% in gains to go, which is probably the shortest distance among all top cryptocurrencies, even Bitcoin.

The picture that Binance Coin draws on the charts

As already mentioned, BNB was one of the rock stars of 2019 - so much so, that even a correction after the minor bull market of 2019 didn’t manage to throw it off the uptrend on the monthly BNB/USDT which began way back in November of 2017. 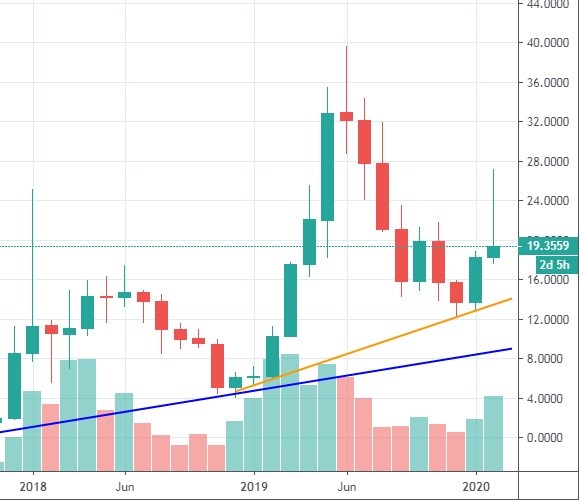 The price movement to the upside has been so persistent that in order to break the ascending trend, it would have to drop below $14.5, which is highly unlikely even in the situation of a harsh correction that we see now throughout the entire cryptocurrency market. Besides, even despite the correction, the price of BNB still draws a green candle, though it could be a gravestone doji in the making. Presently, the price is distracted from testing the $21 resistance, but it should come back to it shortly, given the heavy buy volume seen on the chart. Once the $21 level gets flipped to support, the next resistance line is to be expected at $28.

Moving on to the weekly time frame, Binance Coin is currently experiencing a deep correction after six weeks of continuous gains.

After hitting the ceiling at $27, BNB plunged to the level below $20, which coincides with the 0.236 level on the Fibonacci retracement. If the price manages to stay above that level, traders could see it bounce back above $23, thus giving the coin a chance to continue the uptrend in which it has been moving prior to the correction.

Interestingly, even after such a nosedive, the price of BNB remains intact with the general rising trend, at least on the weekly time frame. Therefore, if BNB doesn’t fall lower, the present level could be a good spot to open a long position.

Moving on to the daily chart, where the price action appears to be more pessimistic as it has decimated the uptrend construction and fell to the mid-January support level $17.5. 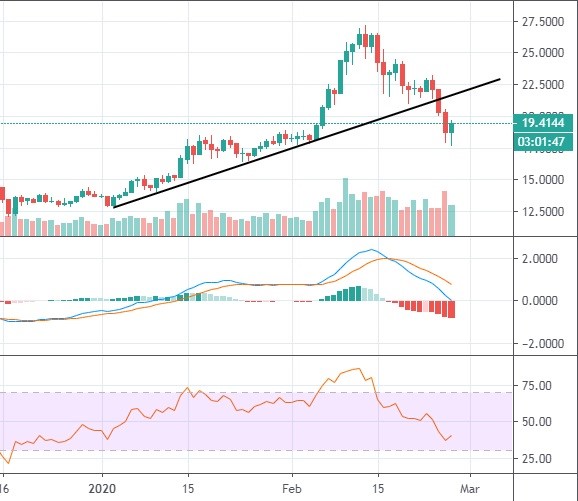 The 14-period RSI is close to the oversold territory, but still has some space to go downward. MACD is also largely bearish as it is about to descend below the zero-line. Nevertheless, the decline in Binance Coin price seems to be temporary, whereas the price action on the larger time frames points at the further growth in value after the correction ends.