When it comes to Binance Coin (BNB), it is becoming increasingly obvious that the coin was, is, and will be one of the best performers in 2019. This is likely the only cryptocurrency that has spent the majority of the year growing, and it even exceeded its former ATH by almost doubling in price earlier this year.

While most of BNB's success is likely a direct consequence of the decisions made by its parent company, Binance — there is no denying that BNB has outperformed pretty much every other notable altcoin out there.

But, what will happen to BNB in the future?

In order to understand where BNB might go next, we should first take a look at its performance so far. The coin's behavior is very similar to Bitcoin in its early days, with sudden sharp surges, corrections, and new surges that have taken it much higher than the previous ones.

This is the same kind of behavior that we see with BNB. The coin was launched back in July 2017, with a price of $0.1 during the first few days of its life. However, a month later, in August 2017, BNB surged to $2. After that, a correction followed, taking its price back down to $0.7. Already, the correction had left the coin much higher than its starting price, and similar behavior has followed it ever since. 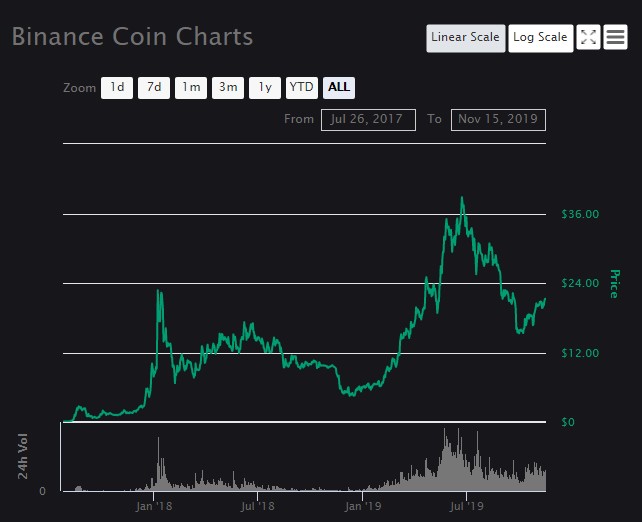 Then came 2018, during which BNB attempted to follow its established path, although it was made very difficult for it due to the strong bearish market. The coin was temporarily prevented from surging once again, although its charts do show that it spent the first half of the year slowly increasing, even if it struggled to do so.

The second half of the year saw a correction that BNB was fighting against, and finally, a second market crash in November, caused by the BCH hard fork and hash wars.

BNB finally returned to its pattern in 2019, after the crypto winter loosened its grip on the market. The coin has wasted a lot of time due to the crypto winter, so its surge from early 2019 ended up being quite rapid and sharp. BNB exceeded $36 this time, starting its growth almost as soon as the year itself had started, and months before BTC bull runs took the market back up.

After peaking in late June, however, BNB once again entered a correction that took it down to $15.

What will happen to BNB next?

BNB's latest correction seems to have found its bottom at $15, and the coin has once again started slowly growing in the last two months. This growth was a struggle, similarly to the one in the first half of 2018. However, it does seem like BNB once again entered the positive half of its pattern, and that the new surge has started.

Historically, these surges are often sharp, and they last for only a few weeks, meaning that BNB is either still preparing for its growth, or that the growth is becoming more steady. It is also possible that the current market is holding it back a bit, preventing a surge from reaching its full potential.

Regardless, with the end of the year approaching, it is very likely that BNB will start surging rapidly yet again, perhaps even reaching a new ATH before the year ends. That is, if it continues to follow the old pattern. Since there are no certainties in the crypto market, it is difficult to tell, and investors should plan ahead carefully.