With the cryptocurrency prices once again being on the rise in 2019, investors are once more looking to expand their investment portfolios. The rising prices have encouraged many to venture outside of the top 10 crypto list, and seek out altcoins from the deeper parts of the market.

One of the go-to coins in these situations is Basic Attention Token (BAT), which is trying to revolutionize the way modern online advertising works. As a coin that was also publicly supported by the largest crypto exchange, Coinbase, it is hardly surprising that BAT has been interesting to a lot of investors.

But, what can be expected of it in the near future? To determine that, we must also take a look back, and review its past.

BAT is not a particularly old coin at this point, and it only has a little over two years of its own history. Its price never reached thousands of dollars, or even hundreds. In fact, it never even reached $1. At its highest point ever — its all-time high (ATH) — BAT barely reached $0.94, which happened on January 9th. 2018. 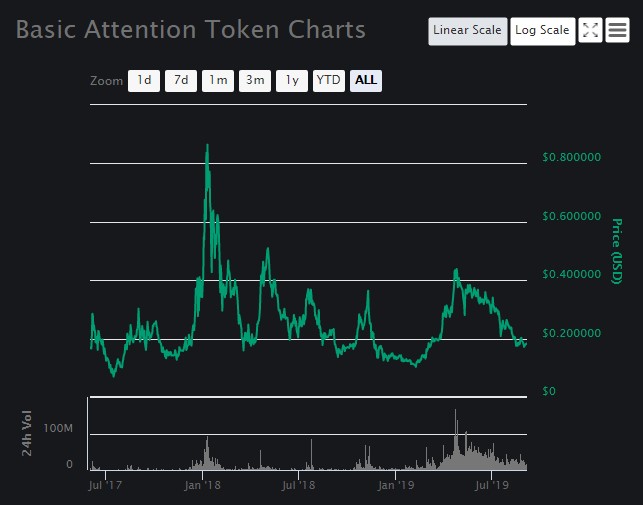 Throughout 2018, the coin has been crashing down, rising again, and then crashing once more. Each new growth was weaker than the previous one, but each time its price dropped, it was mostly held by a support at $0.20.

However, even this support eventually got broken after a price drop in mid-November, when the market saw another crash following the Bitcoin Cash upgrade and hash war with Bitcoin SV.

The situation changed for the better in 2019, and BAT finally started seeing a real recovery between mid-February and mid-April. This was a period of almost constant growth, which allowed the coin to reach its third-highest price ever — $0.48. 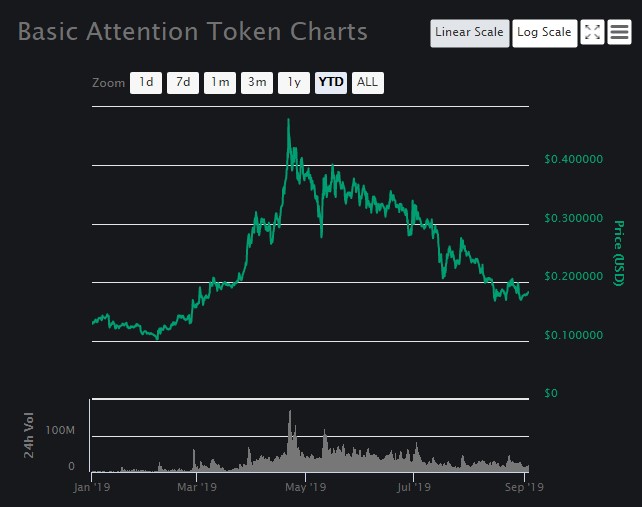 Unfortunately, this was BAT's peak in 2019 so far, and after April 22nd, the coin once again saw its price drop. This drop had finally stopped when BAT approached its old support level at $0.20, although it did not stop before the support was breached. Right now, $0.20 is acting as a resistance level, preventing the coin's price from growing further up, although BAT does seem to show ability and the will to grow.

Bitcoin is in a similar situation right now, with attempts to grow constantly being blocked, and its price being rejected by a major resistance level. It is likely that both coins are only waiting for the next rally that would provide them with enough strength to surge past these resistances and have a clear way up.

BAT itself is a cryptocurrency with a lot of potential. As mentioned, it was supported by Coinbase, and it is the go-to coin when it comes to alternative advertising. The coin's Brave browser went through several updates in the past year, finally allowing some users to start getting rewards for watching ads. Meanwhile, the coin has also granted users the ability to start tipping their favorite creators on Twitter, Reddit, and alike, with plans to go for other networks in the future.

In other words, BAT is a coin that is not likely to just quietly disappear as most altcoins are predicted to. It has use cases, a strong community, and a clear goal that will impact and potentially revolutionize an industry worth trillions of dollars.

No crypto has a guaranteed future, that much is true. But, a few coins do have greater potential to survive in years to come, and Basic Attention Token is definitely one of them.