Fundamentally, Basic Attention Token (BAT) is one of the finest cryptocurrencies that emerged in the crypto space in the past few years since it has the potential to radically change the very concept of online advertising and rewarding the content creators. However, in the current market situation, the price action of BAT, and nearly any other cryptocurrency, for that matter, isn't influenced by fundamentals because right now, the value of cryptographic assets is determined by crowd sentiments, as well as the course of development of COVID-19 pandemic.

Last month has been relatively productive for the cryptocurrency market in general, and Basic Attention Token in particular, as the online browser-backed cryptocurrency has risen by 29% against USD and 4.2% against Bitcoin. But the seasoned traders know that such revival could be nothing more than a retracement that precedes an even deeper dive. BAT's all-time bottom was at $0.06 - the price reached that level in January 2018 - so the currency still has plenty of room for either a steep or a gradual fall.

A lot of bearish signals countered by a bullish one

It is only natural that such a deep dive, which BAT took last month, is going to be followed with a partial recovery, which in that case constituted 58% of the drop. Five weeks of continuous growth could have instilled a great deal of optimism in traders who prefer smaller time frames and are bullish in general. However, those who like to zoom out on the chart and analyze large time frames, like the weekly one, must have come to realize that the situation is not as bright as it may seem. 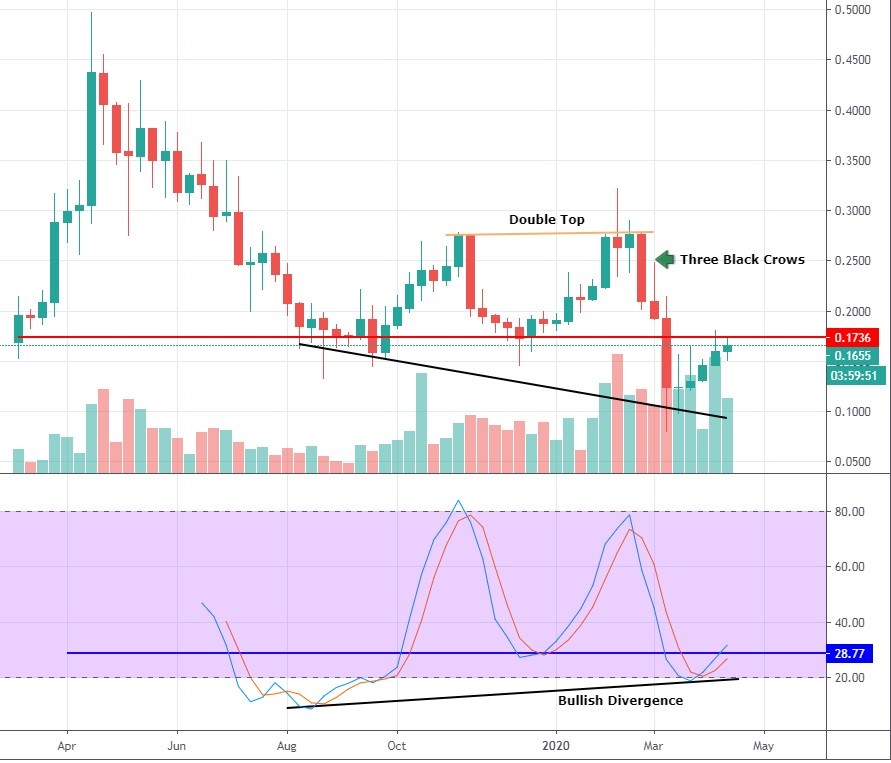 Firstly, the price action had formed the double top pattern way before the market crash even occurred. It is widely considered as a very strong bearish pattern, so traders should have begun devising shorting strategies back in the middle of February.

But then it got worse - the double top was immediately followed by three black crows that also provided a strong bearish signal, although in that case, the pattern was incomplete because the middle candle didn't have enough body. Nevertheless, it raised the probability of a further downfall almost to the maximum. The Stochastic oscillator flew in line with the price action, having formed a double top of its own.

The bullish price action of the past five weeks provided some relief to frustrated investors and traders who didn't catch the bearish signals, but the price has already approached both the point of the retracement peak and the strong resistance level at $0.17 with which BAT has been interacting for over a year.

But there is one important pattern provided by Stochastic that contradicts the entire notion of the continuation of the bearish trend - a bullish divergence that began forming last August. It is supported by the visibly increasing buying volume that collectively outweighs the selling one from the last 90 days.

To summarize, Basic Attention Token is at the crossroads, and the level at $0.17 should be deemed as decisive with regard to the path that the price is going to undertake in the foreseeable future. However, the breach of that resistance shouldn't be perceived as the inception of uptrend because the scenario that provides for a bullish trap is still in play. All in all, traders should keep an even keel with regard to BAT and don't rush into taking any large positions yet.