The unparalleled market crash that took place last week, which was already labeled Black Thursday, must have been especially frustrating for the holders of Basic Attention Token, as well as for the members of Brave Software Inc., the company that brought the cryptocurrency and the Brave browser to life because it had happened just after the announcement that the number of daily active users of the proprietary Internet browser has surpassed four million.

In other circumstances, this news would have fueled a nice episode of bullish price action and upticked the value of BAT by 10% to 20% - but that wasn’t meant to be. The information about the boost in DAU had surfaced around March 9 and indeed pushed the price up by some 17%, which turned out to be the last chance for traders to lock their profits before the legion of bears came knocking at the door. 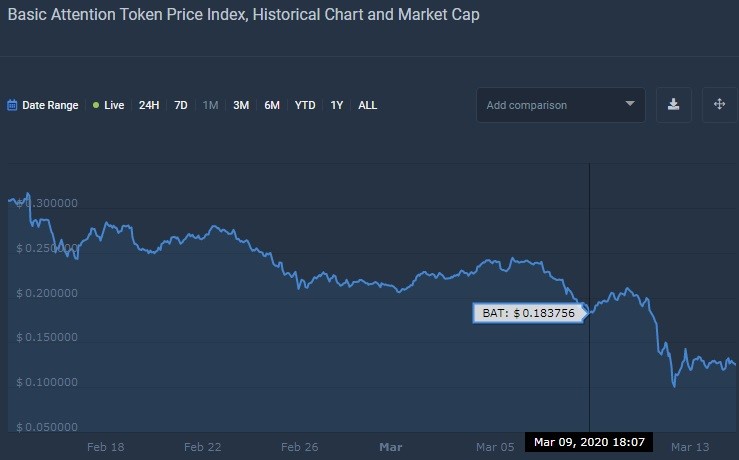 The all-time low is in sight

No need to go at length about what happened next to Basic Attention Token - every cryptocurrency holder who has his skin in the trading game had felt the knockout punch that send the 34th cryptocurrency down by 48.4% on the first day of the dump, and then another 22% on the second day, driving the price as low as $0.0799 per coin, though the price closed at $0.11 on both days. 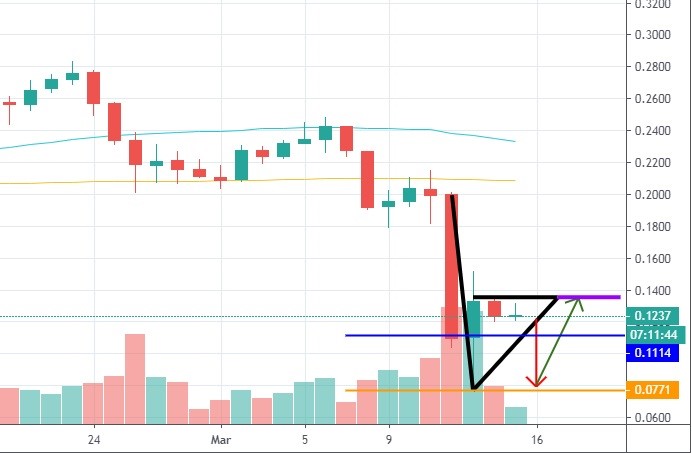 From then on, BAT has had a slight recovery, which translated to the bearish flag pattern and a consolidation period that occurred on the back of relative stabilization of the US stock markets, which are believed to have the increasing rate of correlation with Bitcoin and Basic Attention Token, by association.

Certainly, we can’t fully rely on the behavior of traditional markets, most notably the S&P 500 index, to forecast the price of BAT, but the fact that this index has been displaying signs of recovery after Trump’s speech, and the supposed infusion of liquidity, should be factored in.

However, one shouldn’t expect a miraculous recovery to $0.2, from which the dump began, simply because the global tensions concerning COVID-19 still run very high, with business activities dying off around the world, so there is not a single prerequisite for a quick bounce back to the original level.

Traders should also keep in mind that another move below $0.1, with the following consolidation at that level, would mean that the coin would have dangerously approached the all-time low of $0.072 - the breach of this level would send BAT in uncharted waters with no historical data to base the forecast on.

On the other hand, hitting the all-time low would pose an immense psychological barrier for the bulls that could view it as an opportunity to stock up on BAT at the lowest price, thus catapulting the price back to the current level.