Even though Basic Attention Token wasn’t among the most significant profit-makers of the current bullish rally, the 29th cryptocurrency still approached the February’s equator with double-figure gains, making consistent price improvements of 10%+ on a weekly basis. We have already covered the main points regarding BAT’s fundamentals, so it would be sufficient to mention some tweaks to the current system and new introduction to the range of services and user options.

Delayed price increase on the back of improvement in fundamentals

For instance, registered users can now receive rewards in BAT for posting sponsored images on all platforms that support the proprietary Brave browser. The company also reports the 19% increase in monthly active users since the launch of Brave 1.0 version of the browser, which took place last November.

However, the launch of the newer iteration of its core product didn’t play out well for the value of Basic Attention Token. Right after the launch date, the price of BAT took a deep dive, after showcasing a two-months long sustainable growth. It took the coin more than 40 days to recover, but it did so in style, having smashed through the previous resistance level at $0.27 that had been holding since the end of last July. 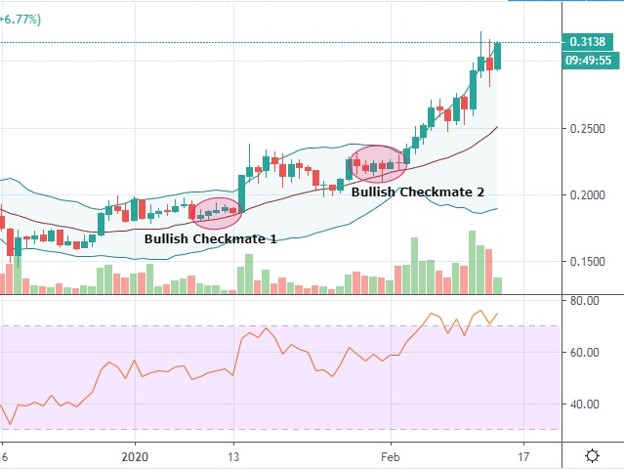 Zooming in on the daily chart, we can see that the price of BAT is really fond of a bullish checkmate pattern, accompanied by a heavy or an increasing buying volume - both these elements in combination have proven to be a reliable buy signal.

On both occasions, the emergence of a bullish checkmate preceded a substantial price boost, so traders should be on the lookout for this particular pattern for future swing trades. Also on this chart, it becomes evident that the trade on the back of the bullish pattern that goes right into the Bollinger Band squeeze is almost a sure recipe for profits as the price BAT has taken off from $0.2 all the way to the current $0.3 with practically no pushback from the bears.

What to expect from BAT in the near future

Now, the coin appears to have already overextended the upper BB channel, which could signify the approaching retracement, the depth and the extension of which remains in question. Given that on the previous instances, BAT was pulled back by no more than 15%, the next one could drag the price down to $0.27 - that is, of course, if Basic Attention Token wouldn’t be able to overcome the resistance at $0.32.

This could be the case since the 14-period RSI is presently above 70. However, the 12-26 MACD hints at the continuation of a bullish phase, judging from the fact that the histogram is on the rise; thus the moving averages are getting further away from each other that signifies the continuation of the ongoing price move. Therefore, traders still have time for a quick trade, but it’s important to take profit at the first signs of exhaustion. Given the vigor, with which Basic Attention Token strides to the upside, we could see it reaching $0.4 in a couple week's time.