Despite being one of the most fundamentally sound cryptocurrencies, Basic Attention Token (BAT) hasn't been putting up any significant results in terms of price action lately. The negative 42% against USD on the yearly time frame and only 15% gain over the past 30 days suggests that there is not enough fuel in the BAT market for the price to make any noteworthy strides. However, it doesn't mean that the currency bears no upside or downside potential in general. But for the time being, Basic Attention Token has been lurking in the shadows, not making any headlines or featuring in the 'top gainers' ranks.

Abiding by the ascending channel, for now

When the COVID-19 panic sale made the cryptocurrency market crumble, BAT went along with the rest of the coins, losing 60% of its value in a matter of three days. Like in many other crypto markets, the golden cross on the daily time frame played a cruel joke on traders. In contrast, the death cross that followed worked out to the fullest extent, and every trader knows what happened next, not only to BAT but to the market in general, a total and unhinged capitulation.

Nevertheless, being a solid cryptocurrency with an established pool of sellers and buyers, Basic Attention Token didn't hesitate to begin getting on its feet after the knockout blow. What's fascinating about this currency is how diligently and meticulously it has been making its way to the upside within a picture-perfect rising channel. One doesn't have to be a seasoned trader to make money in such an obedient, pattern-adhering market that features only one relatively erratic move to the upside throughout the past three months. 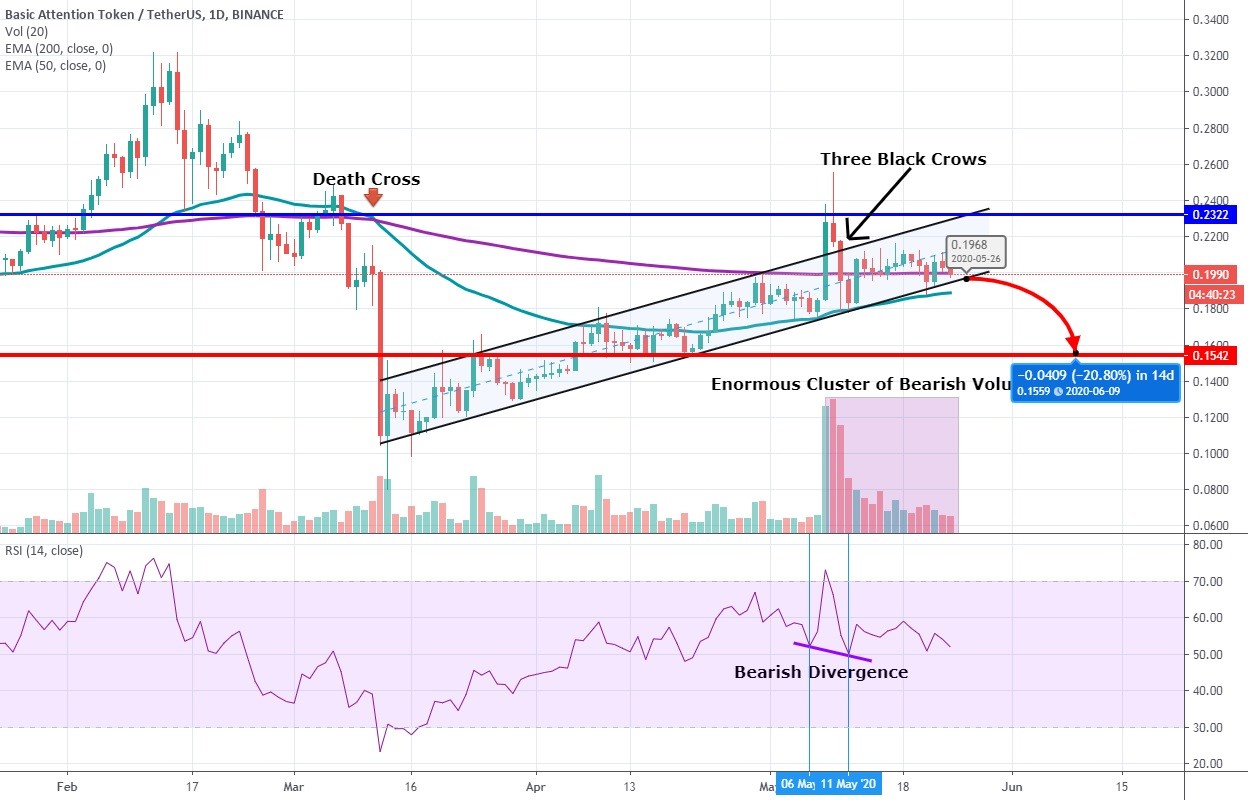 Little by little, BAT has been paving its path to the upside, climbing on top of the 50-day EMA to confirm its bullish intentions, and then the 200 EMA, although the latter hasn't been fully mounted yet. It seems that Basic Attention Token could be gliding in such a groovy tempo all the way to the all-time high at $0.98, but the bears seem to have other plans regarding its future price. There are three main factors that suggest the looming reversal of the current mellowy minor uptrend.

Thirdly, the volume profile displays a gigantic spike in bearish volume right after the penetration of $0.23 that later transformed into a big cluster of such volume, which could mean that a lot of traders are going short on BAT.

The analysis of all these factors brings us to the conclusion that traders should brace themselves for a sizable price decrease of no less than 20% in the next two weeks, followed by a consolidation below the 50 EMA. Therefore, if you went long on BAT anywhere above $0.154, now would be a good time to place a stop-loss.