Basic Attention Token (BAT) has demonstrated an instance of very strong growth in the past 30 days against USD, rivaled only by that of the cryptocurrencies that represent the DeFi space. In the said period, BAT got a 42% bump to its value in the main fiat currency and also had a decent 15% positive performance against Bitcoin.

The historical chart above demonstrates how methodically the token has been recovering after the March flash crash, up to the point where it found itself in close proximity to $0.45, the peak of the last major bull rally that took place in 2019.

Bulls are out for this week

On the macro scale, Basic Attention Token has arrived at the point of great importance because its behavior in the next few weeks will determine whether the altcoin for marketing and content monetization possesses the genuine intention to establish the first higher high on the historical chart since the infamous dump of 2018.

The chart shows BAT going swiftly to the upside, along with a sharp spike in trading volume, instigated by arguably the strongest bullish push the token had seen in months. The successful conquest of $0.45, and preferably the second price edge at $0.5 that marked the full reversal to the bearish side in 2018, would put Basic Attention Token is a secondary uptrend and open it the way towards, and above, the all-time high. The present conditions in the cryptocurrency market are largely favorable for the bulls, so a push above $0.5 seems feasible, especially if the price won’t get severely rejected at $0.45.

To get a clearer picture of the occurrences in this market, let’s take a look at the weekly time frame, where we can see that BAT’s initial attempt to even reach the level at $0.45 was futile as the price met the opposition from the bears even before the designated level, which has already resulted in the 11% push to the downside. 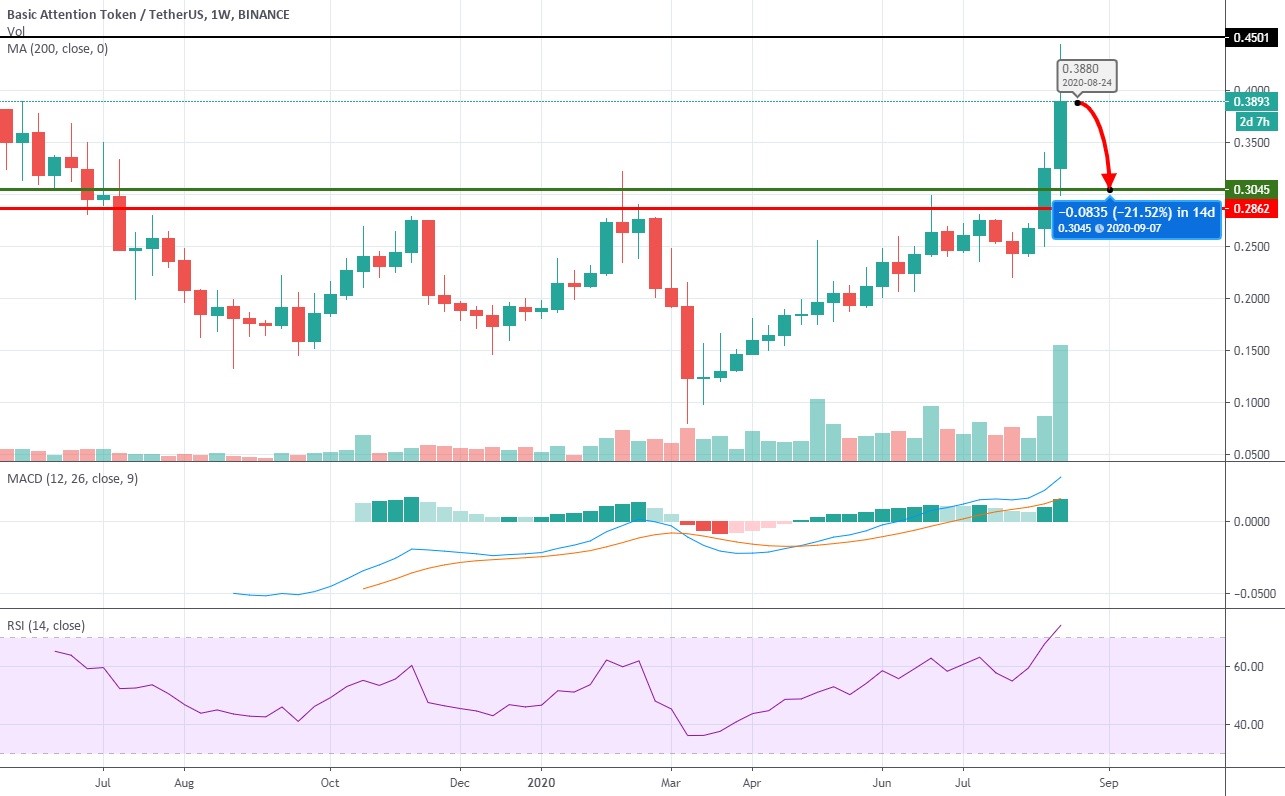 Given the enormity of trading volume we see in the BAT/USDT pair this week, the price is unlikely to close above $0.45 during this run, thus leaving the market overheated and below the crucial resistance, which increases the probability of a deep retracement that may well turn into a correction and leave BAT in the bearish territory.

Since the cryptocurrency market as a whole decided to give the gains a rest at the end of the week, it’s highly unlikely that BAT would make a heroic move above $0.45 before the week’s close.

Our Basic Attention Token price prediction is that the token would require a retracement before making another attempt at $0.45, with the most probable retracement bottom established at $0.3. A move to, or below, $0.28 would cancel out the bullish scenario.