In our previous BAT price prediction article, we warned about the approaching correction that must take the price down by at least 20% in two weeks. That is precisely what happened when the price was unable to break the resistance at $0.43 in two takes and went into a steep correction, which has already eaten away 50% of BAT's value at $0.4, recorded at the top of the bull rally, leaving the popular token for content creation and advertisement industry priced at $0,22, while the altcoin's market capitalization also decreased from $592 million to $328 million, mostly due to a sudden turn to the bearish side in the first days of September. 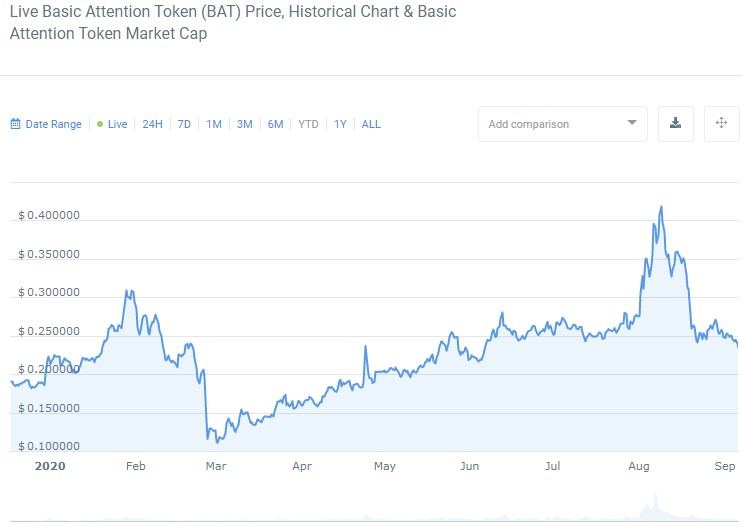 Down the river BAT goes

It is clear that Basic Attention Token couldn't sustain the uptrend and saw its structure collapse dramatically under pressure that came from the sellers. Given the bearish developments in the traditional markets, where the S&P 500 fell by 8% in three weeks, the largest pullback since the March crisis, traders mustn't expect any rapid reversals to the upside on the part of the cryptocurrency market, let alone BAT. Besides, the world is officially entering the second phase of the coronavirus pandemic, thus significantly increasing the possibility of Basic Attention Token getting back to the price levels near $0.15, seen six months ago. 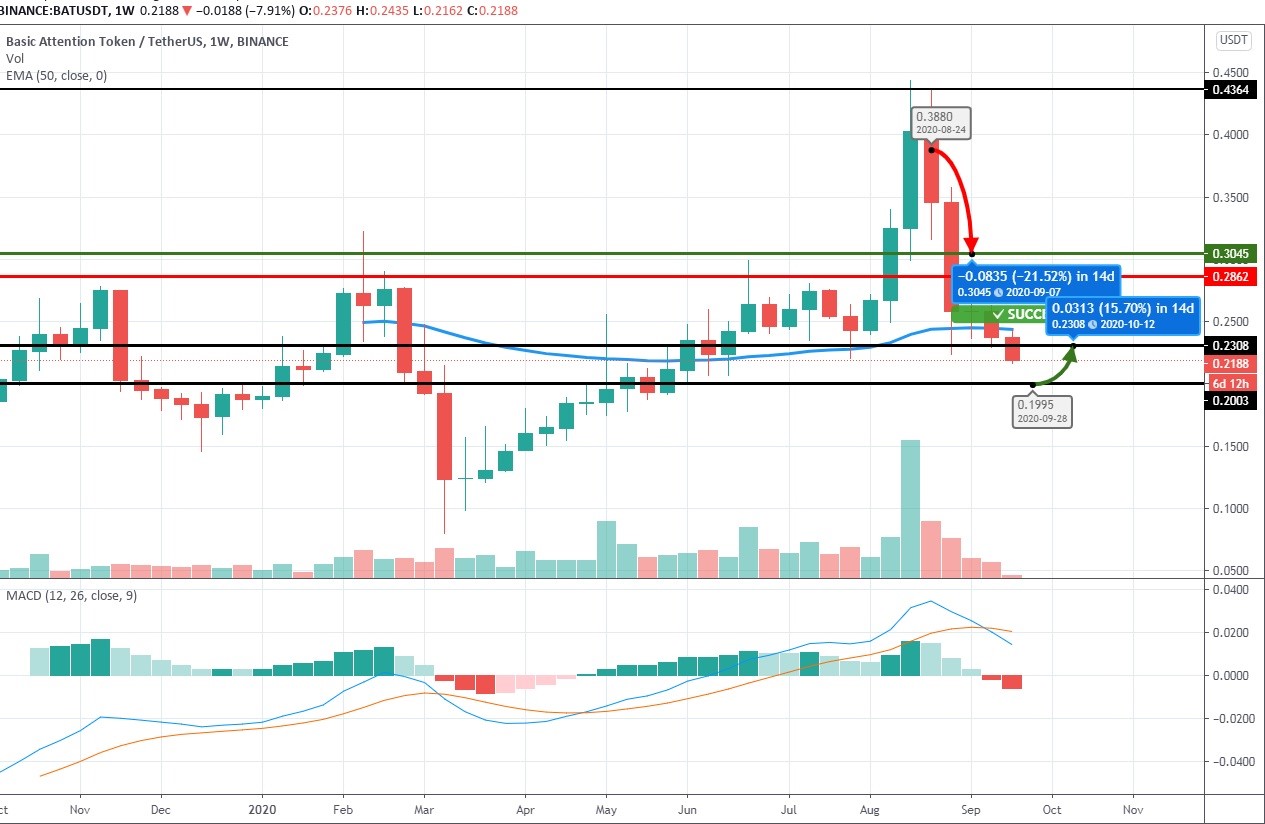 The bearish dynamics on the weekly chart appears to be getting stronger as the sellers have already pressurized the price below the 50 EMA, while MACD made an obvious bearish crossover, which usually leads to further price depreciation. There is a possibility that the price fall would stall for a while at the psychological price level near $0.2 and afford traders an opportunity to make a quick play during a short bounce to $0.23. The trading volume, which has fallen to its bare minimum, also hints at a temporary reversal in price flow, although the general context dictates that the selling pressure will keep on mounting.

The showings on the daily chart go in line with the overall bearish agenda as BAT has fallen through the floor at $0.23, whereas MACD couldn't bring itself to forming a bullish crossover as its moving averages flow in close proximity to each other, which is also a prerequisite of a consolidation period.

Here we see that Basic Attention Token is deep below both 50 and 200 EMA, which puts the coin in the entirely bearish perspective and leaves those who didn't heed the signals provided by the market holding the bag. 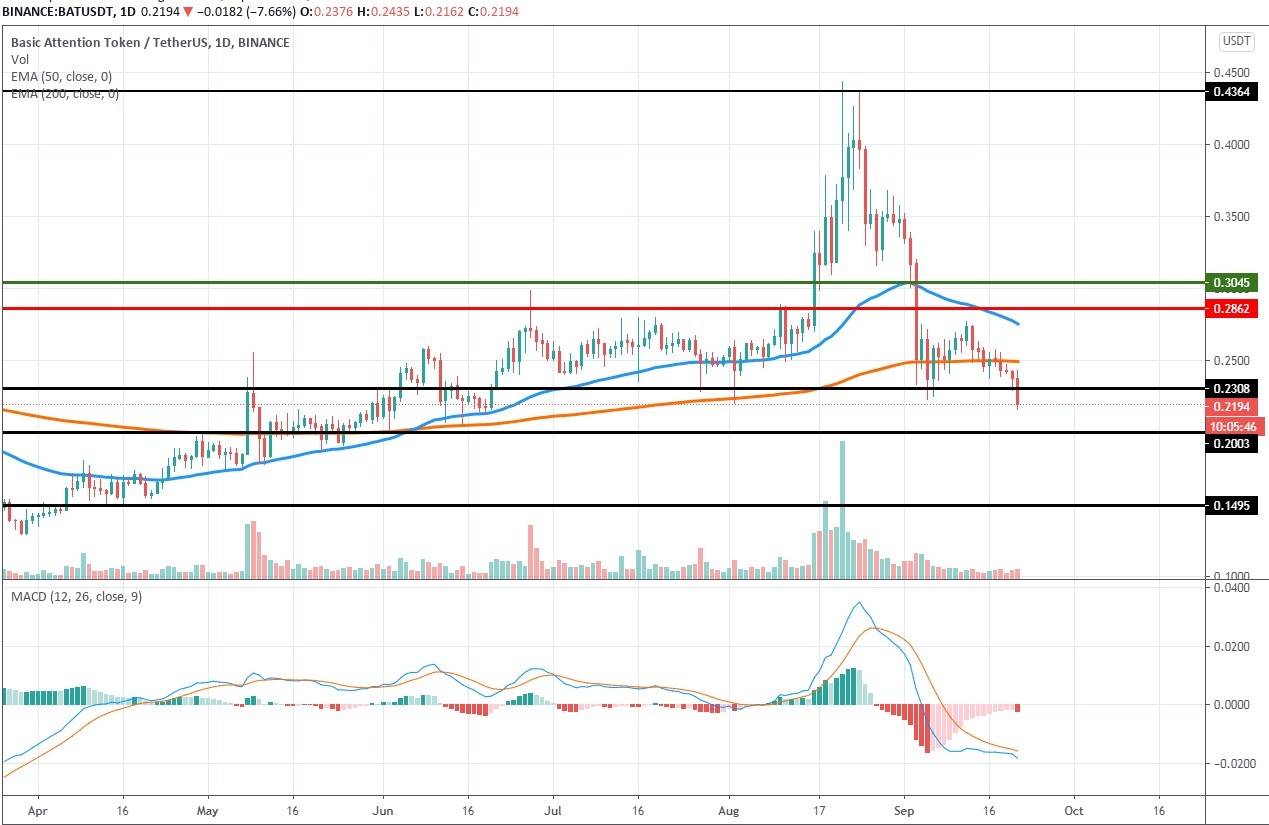 We reckon that on this time frame,  MACD will drop to the very bearish extremes while the price travels south to $0.2 for the mentioned bounce. The analysis of trading volume tells us that traders and investors are leaving this market or sitting in cash, awaiting the signs of genuine reversal that might come in the form of a morning star pattern or a double bottom.

Such factors as the overall bearish sentiment on the cryptocurrency market, the possibility of another correction on traditional markets after their saturation with idle money from the Fed, and the worsening situation around the COVID-19 pandemic will greatly contribute to the further decline of the Basic Attention Token price, with the drop to $0.15 being the worst-case scenario.