After spending nearly three months being stuck to the price level at $1.2, Bancor Protocol (BAND) bought a place on the rocket that took it straight to $4.8, the new all-time high, thus making traders remember the bull market of 2017/2018.

BAND required no more than 16 days to finalize its massive 326% rally upon hitting the ceiling at the psychological level of $5. We have already provided a comprehensive analysis of the reasons behind such an enormous price spike in the previous BAND price prediction article, so now the question is whether Band Protocol would persist marching to the upside until after the release of the major system upgrade, or has it already climaxed and traders should brace themselves for a sharp correction?

The exhausted BAND goes into a correction - is this the time to exit the market?

If there is an altseason, Band Protocol is surely one of its most prominent participants due to the unprecedented bull rally that has put this coin on the radar of many retail traders. The main thing now, especially for the nascent speculators, is not to be foolish enough to buy at the top as BAND might display the prerequisites for a tangible drop that should result in the price finding the first real lower high. 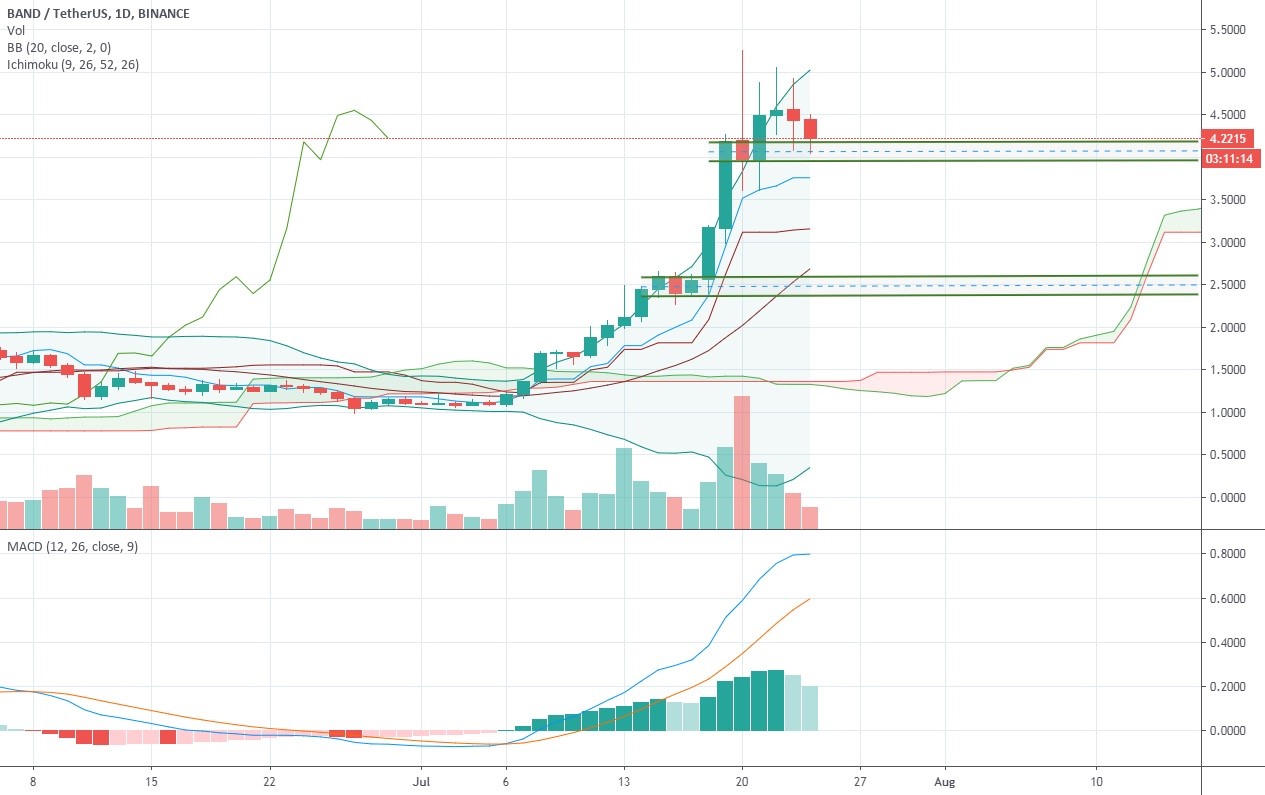 The example of Theta (THETA) shows that even the multi-stage rally can end in a very deep correction of 40% or more. As of now, BAND descended “only” by 19% after testing the resistance at $5 twice, although without displaying any panic on the side of sellers.

It seems that traders are waiting to see how the price would interact with the first distinguishable resistance area between $4.17 and $3.96, which could provide an answer to a question regarding who has the upper hand in this market that is obviously overheated, judging from the extreme extension of Bollinger Bands, as well as the fact that MACD hints that the coin is already severely overbought.

We also noticed that the trading volume is on a sharp decline, a sign that buyers have temporarily lost interest in this market or await an opportune moment to re-enter it.

The second evident support level on the daily time frame was established between $2.6 and $2.39, which we have determined to be the ultimate destination for the unfolding correction, reaching which would also mark the commencement of prolonged consolidation. However, traders shouldn’t disregard the continuing hype around the approaching network upgrade, as well as the behavior of Bitcoin that appears to have exited the multi-week stupor, thus leaving the possibility for a short retracement to the first of the two designated support levels with the subsequent explosion to a new all-time high that is likely to be around $5.5 - $6.

All in all, we reckon that the growing interest in blockchain oracles, which is the core of BAND fundamental value, will keep the price of this cryptocurrency from collapsing, so the current retracement is likely to be modest with a further bullish outlook.