Bancor (BNT) Explodes to the Upside in Anticipation of Bancor V2

Bancor (BNT) is the cryptocurrency that has been around since 2016 and lived through the bubble of 2017/2018 when it reached the all-time high at $10, and the following steep correction that appears to have ended at the beginning of May, after the price of BNT initiated a determined progression to the upside. 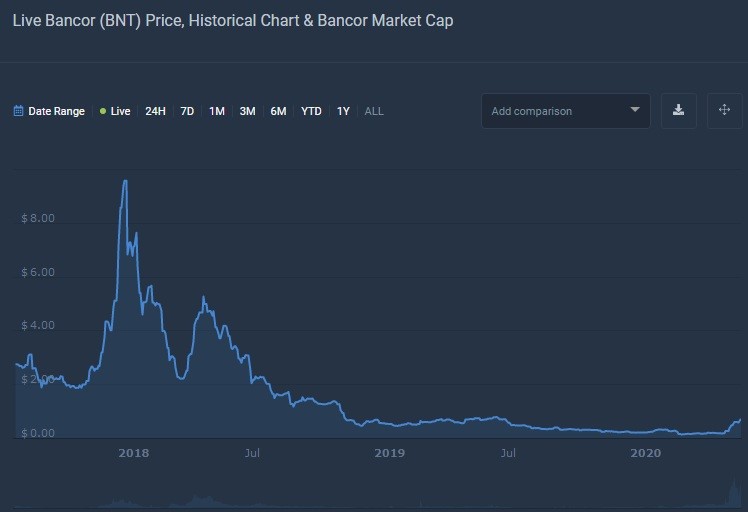 Bancor is an altcoin that sits at the bottom of the top 100 (BNT is ranked 96th), right next to BitShares (BTS) and Unibright (UBT). Such a low rank is determined by the project's subpar market capitalization of $59 million. However, lately, it has had a significant bump thanks to the bull run, which allowed the capitalization to rise to the current showings from the mere $14 million, which is also a sign of the underlying tectonic changes in this market.

Fundamentally, BNT represents a blockchain solution with the on-chain liquidity protocol at its core that affords means for running the fully automated decentralized exchanges (DEX) on multiple blockchains, although Barcor is more fine-tuned for the Ethereum blockchain. Apart from being a trading instrument, BNT is also used for staking on the network, as well as exercising the voting rights in the Bancor DAO. Since decentralized exchanges are gaining traction from traders, thanks to being more secure, Bancor's solution has been in growing demand that was correspondingly reflected on the price charts.

On April 29, the Bancor team announced the upcoming launch of the Bancor V2, a major system upgrade that will introduce the AMM liquidity pool with direct integration in the Chainlink oracles, along with lending protocol and several other important features. The release of Bancor V2 is scheduled for Q2 of 2020, which should be one of the main reasons behind such a staggering price growth of nearly 300% against all three major currencies: USD, BTC, and ETH, in a month. That growth even allowed Bancor to get back into the green on the yearly time frame. 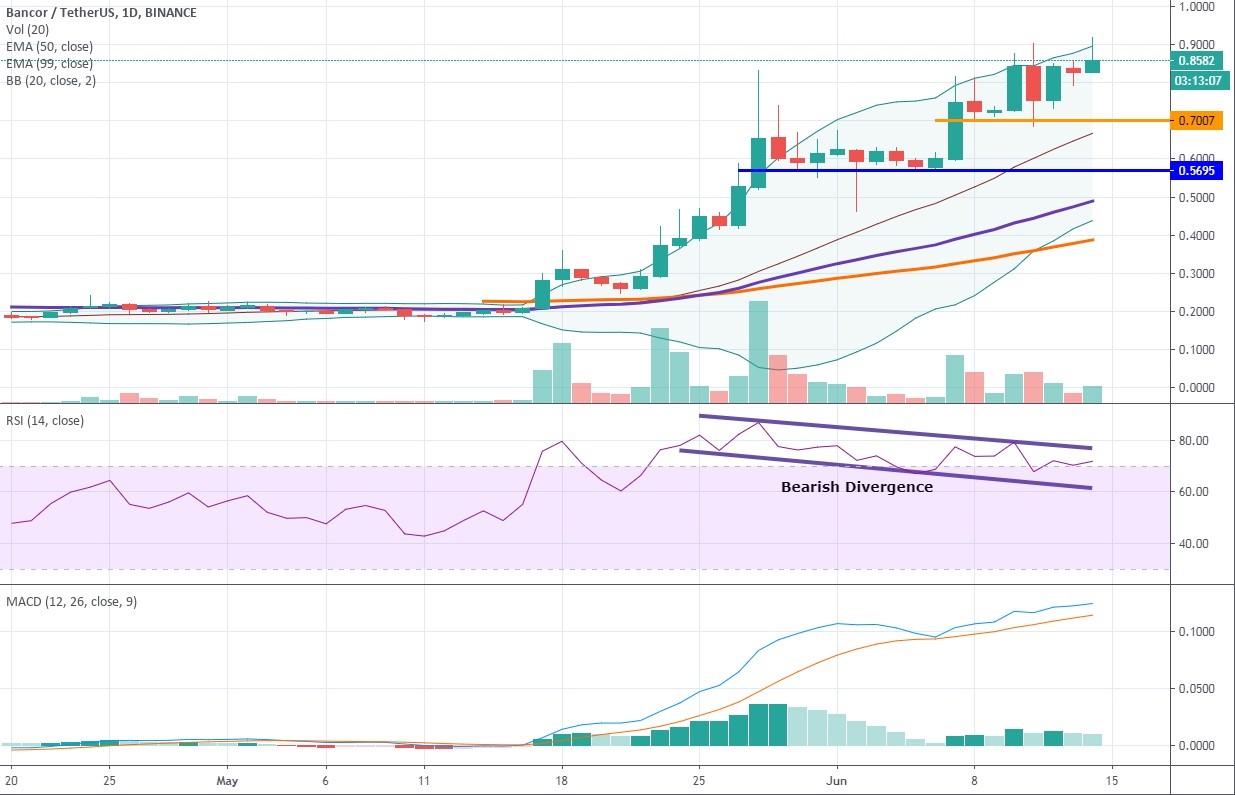 The ongoing bull rally could be the first sign of the fully-fledged downtrend reversal because the price has bottomed out from the all-time low at $0.11, which was recorded on March 13. If that's the case, then Bancor shouldn't encounter a severe resistance from the bears up till the price level at $1,20, the long-standing support level that preceded the 18-month long consolidation.

After the initial upside impulse, the price held strongly to the support level at $0.56, which could serve as the price target for a shorting play in case the bears would apply significant pressure once the price reaches the psychological level at $1.

Even though the price is still aiming higher, the market already looks extremely overextended. Plus, there is a bearish divergence on the RSI, which might not play out to the fullest due to the overarching bullish sentiment in this market, but still cause the price to hit a skid and retrace to $0.7, which at that time, should coincide with the middle line of Bollinger Bands. MACD also shows that the coin is severely overbought as it already flies high above 0.1, so the market will be longing to cool down before the next burst of bullish price action.

To summarize, we predict that BNT will conquer the $1 mark over the next two weeks, but it might have a period of retracement and consolidation prior to the next swing.