Augur was among the first blockchain projects to introduce the P2P protocol for prediction markets, along with a decentralized oracle for the seamless migration of real-world data to the blockchain. REP, which has been recently upgraded to REPv2, following the release of the corresponding network upgrade to Augur V2 that took place in July, incorporates an unusual staking procedure which involves the provision of correct market predictions, or the outcome of any other bettable events, to the network in order to be eligible to receive a share of markets settlement fees. Those who passively hold REP without participating in predictions and disputes are penalized. Also, the fact that the developers have adjusted the platform's technical capabilities to be able to participate in the DeFi movement has also played a significant role in REP's decent performance of late.

REP can't break out of the range

Over the past year, Augur improved its USD value by 71% and bested Bitcoin by 28%, but dropped by 20.1% against Ethereum. The last month was quite brutal to the cryptocurrency market in general and REP in particular as it lost 30% across the board due to the overwhelming selling pressure. As of now, REP is valued at $14.46, having gained 2.3% in the last 24 hours and 8.2% during the week. The prediction/DeFi token currently holds the 70th position in global rankings, with the market capitalization of $159 million and an all-time ROI of 884%. 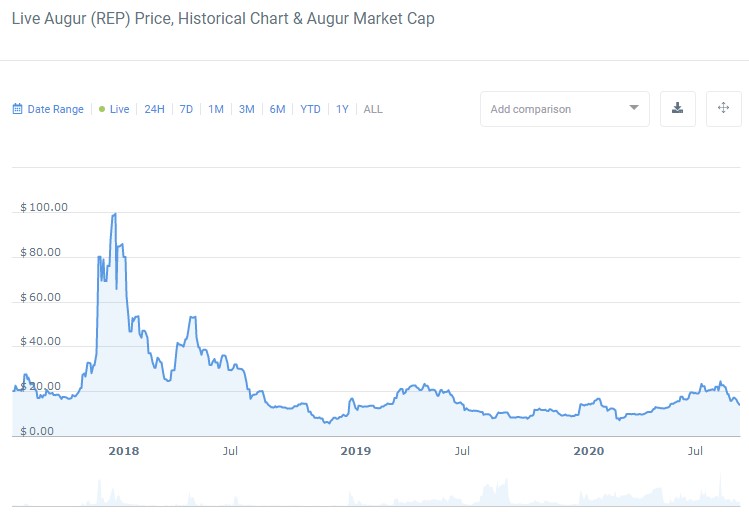 The all-time chart tells that REP is lightyears (or 88%) away from its highest ever value at $99.8, captured during the infamous crypto bubble of 2018. But the most important thing that becomes apparent on the historical chart is the resistance level at $27 that has proven to be insurmountable for Augur ever since the downtrend had transitioned to consolidation. $14.45 is another important price level on the macro scale, where REP had been rejected on multiple occasions, though now, it could serve as a durable support level.

On the weekly chart, we have determined three important price levels that have to be taken into consideration when devising tactics for positional trading. 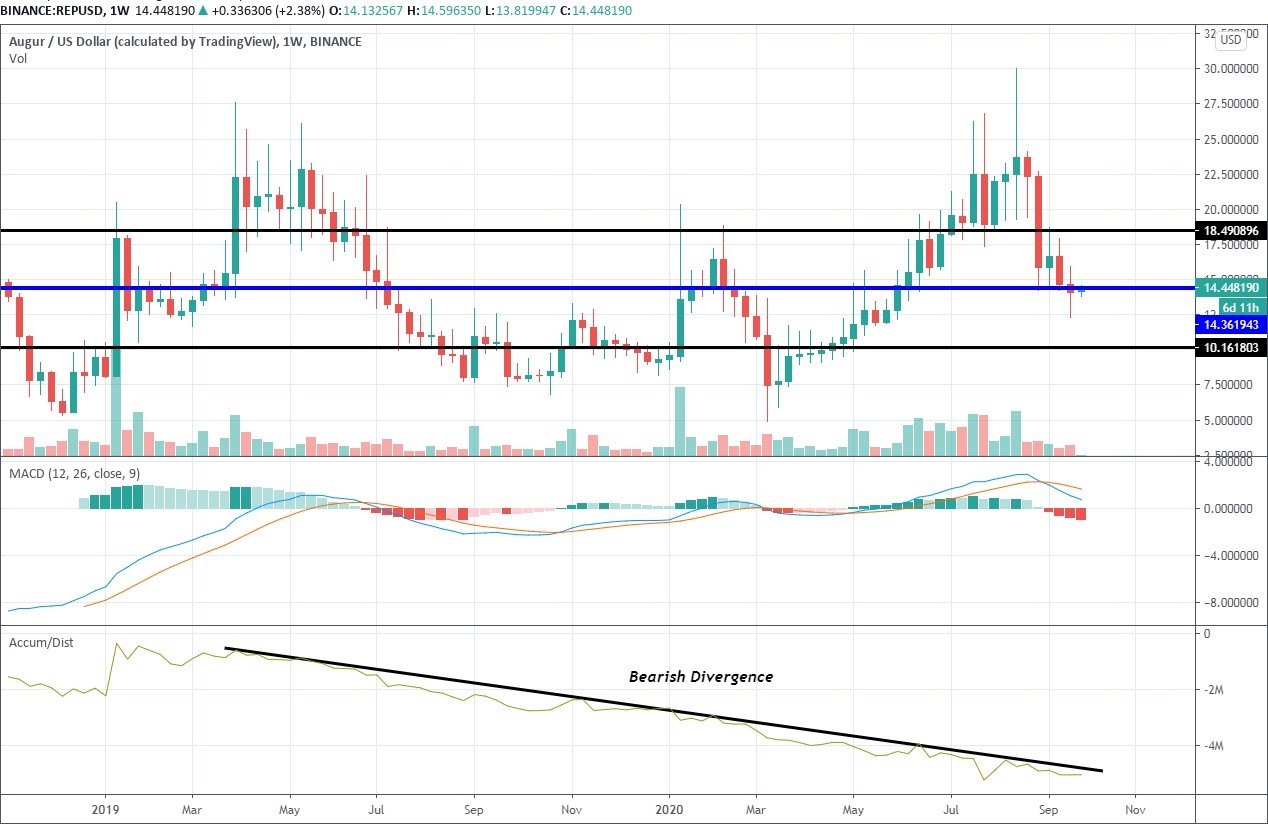 Key indicators, however, suggest that Augur is likely to experience further depreciation due to the presence of the fully-fledged bearish crossover on MACD, with the corresponding momentum yet to reach its peak, judging from the size of the red histogram and the fact that both MAs haven't reached the zero line for a probable rejection;

The Accumulation/Distribution indicator is flashing an absolutely enormous bearish divergence that lingers since May and hints that a significant price drop might happen at any moment.

Our Augur price prediction is that the action in the next four to six weeks will revolve around $14.5 for some time, but will ultimately head southward to the support at $10 - $10.1.