Augur (REP) is the kind of cryptocurrency that isn’t suitable for momentum or even swing trading because its average daily trading volume rarely exceeds $10 million across all exchanges. Such a small volume leads to charts on time frames smaller than the 4-hour ones being extremely choppy and erratic, which makes it virtually impossible to carry out price predictions on a short distance. Therefore, for this analytical piece, we will concentrate on larger time frames and price behavior over the medium term.

No market for old coins?

Since Augur was released way back in 2015, it had its prime time during the period of 2017-2018, when its price had experienced two secondary uptrends and one major one, which had obviously happened at the changing point of these two time periods, and resulted in REP attaining the all-time high at $124.26, which is 88% higher than its current price. 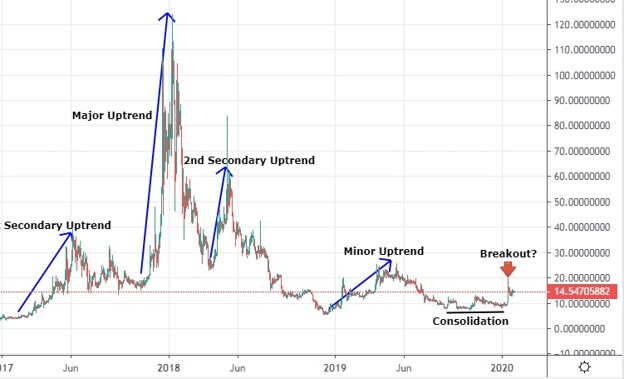 Upon completing the third secondary uptrend, Augur had entered a mild correction, which was interrupted by the last year’s short-lived minor rising trend, and then later segued to a consolidation that has been lingering until the inception of 2020, when REP joined the bull rally that encompassed the entire cryptocurrency market.

But traders know that these rallies come and go as quickly as the weather changes in England, which means that given Augur’s slow price movement due to low daily trading volume, the coin mightn’t be able to jump on the bandwagon when the rally is going to take its last trip to the upside. On the other hand, if the market does confirm that it’s initiating the fully-fledged bullish trend, then we might see REP follow its suit.

This year’s rally of REP happened in a matter of 3 days, as shown in the chart below. On January 14, the price tested the $10 resistance but was pushed back by the bears. On the next day, the trading session commenced with a breakaway gap where the opening price was above the upper wick from the previous day.

This gave way to an incredible 24-hour price increase of 61%. On the final day of the rally, Augur had closely approached the $20 level, but then the price got pushed back and forth, which has given a start to a total indecisiveness, characteristic of REP’s current price action. 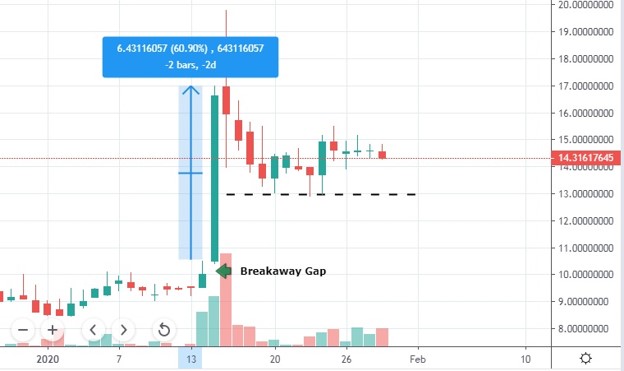 The retracement that followed the rally, and lasted for 4 days, has dragged the price down to what seems to be a solid support at $13 that the bears had already tested three times, though the bulls managed to hold this level. Given that the 14-day RSI shows Augur to be at 60, which is very close to the overbought region, the price is very likely to take another dip in the coming days.

The most probable mid-term scenario for Augur suggests that the price will break the $13 support to the downside since there is a wave of negative publicity regarding REP and its blockchain solution.

For instance, a sports betting platform Wagerr had publicly bashed Augur on Twitter by saying that they consider its ecosystem unsuitable for bettors’ needs. Besides, the price had already seen a boost after the release of Augur v2 on January 14, so it would deflate significantly in the coming weeks.