ATOM is a cryptocurrency of the Cosmos Network - a decentralized ecosystem that consists of numerous independent blockchains that run in parallel. Such an innovative configuration of blockchains allows them to communicate with each other as well as to scale at the desired rate, thanks to the use of Byzantine Fault Tolerance (BFT) consensus algorithms.

One of such algorithms, a hybrid of PoS algorithm named Tendermint, was developed and incorporated by Jae Kwon, one of the founders of Cosmos. Kwon claims that his protocol will ensure the unprecedented level of speed of the Cosmos network, along with the much-needed scalability.

ATOM has the following scope of application: it serves as a means of covering transaction fees within the network; the token facilitates the consensus acquirement; it acts as a primary staking instrument that allows validators to earn rewards for block creation and transaction confirmation.

These are the basic fundamentals of Atom, which are viable and probably hold plenty of promise that had already earned a relatively new coin (ATOMwas listed on the cryptocurrency exchanges in March), a 19th place in the global rankings.

Although this coin made itself known at the dawn of 2019, the Cosmos ICO took place two years earlier and lasted for less than half an hour, during which the team raised $17 million. The price of 1 ATOM during the crowd sale stood at $0,1 per coin. As we can see from the chart, the coin has been laying at the bottom till the spring of 2019, when it skyrocketed to $6,5, almost in an instant, thanks to the exchange listing. 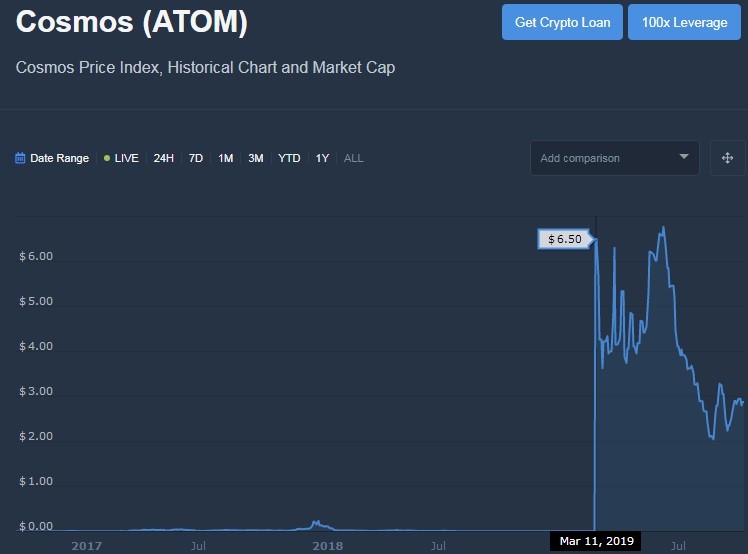 After a short correction, which tested the resistance line at $3,32, ATOM has received the strongest bull impulse to date, which took the price of the coin to its all-time high of $8,66, recorded on April 8, 2019. 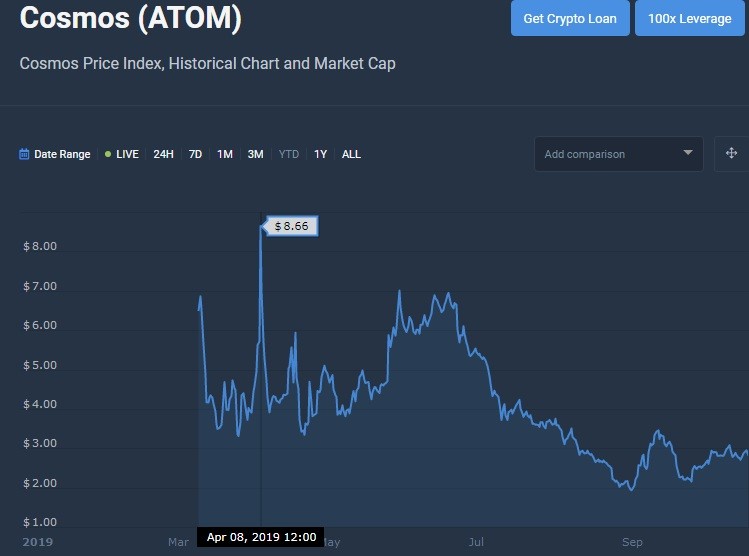 Following that, ATOM experienced another fall with a consecutive rise to the $7 summer resistance line, followed by the steepest correction which the entire cryptocurrency market has had this year. As of the time of writing, the price of ATOMstands at $2,68, which was the result of another 10% drop. We can see on the daily chart that ATOM shows signs of consolidation after a prolonged landslide of price, which means that it should seek resistance at the level of $2,1 (marked as a blue line). 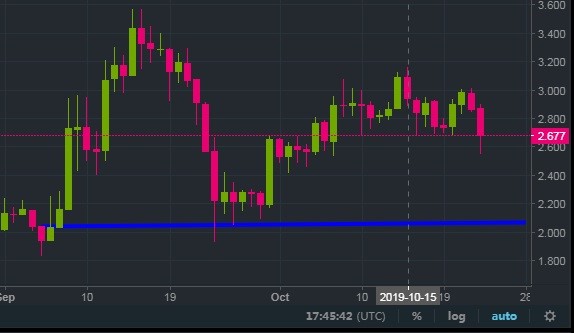 This could result in a further decrease of coin’s ROI that currently stands at -58,14%. However, ATOM has a substantial market capitalization of $514 million and a respectable daily trading volume of $148 million. Therefore, this cryptocurrency has enough potential to show some growth before the end of the year to compensate for its so far disappointing performance that shows the following negative gains on the year-to-date chart.

Right now, many indicators suggest the strong sell of ATOM because there is a chance that the market will go even lower, turning into a fully-fledged bear one before the end of the year.

But those more patient and cold-blooded could keep on holding ATOMs that, as already mentioned, has the potential for the upward movement that could happen at the inception of 2020. Should the team introduce the long-awaited instruments for deploying new blockchains and inter-blockchain transactions, the price of ATOM could easily break the $8 barrier, on the back of Bitcoin halving, and move further up the ranks.