The overwhelming majority of cryptocurrency traders are concerned about the price action of Bitcoin, Ethereum, and a bunch of other top cryptocurrencies, but there are coins from below top 100 that perform much better than the highly-rated ones.

Take Ark, for example, the currency that presently occupies the 124th spot in global rankings has had a fantastic month as it appreciated in value by 72% against USD, outperformed Bitcoin by 32%, and Ethereum by 28%.

Not your first-choice cryptocurrency

Certainly, ARK can't be called a top-shelf cryptocurrency, not by its fundamentals or price action. When speaking of the latter, it looks like that of any mid-rated digital currencies: large spikes during the crypto boom of 2017/2018, followed by a total deflation over the past two years, with some occasional convulsions. 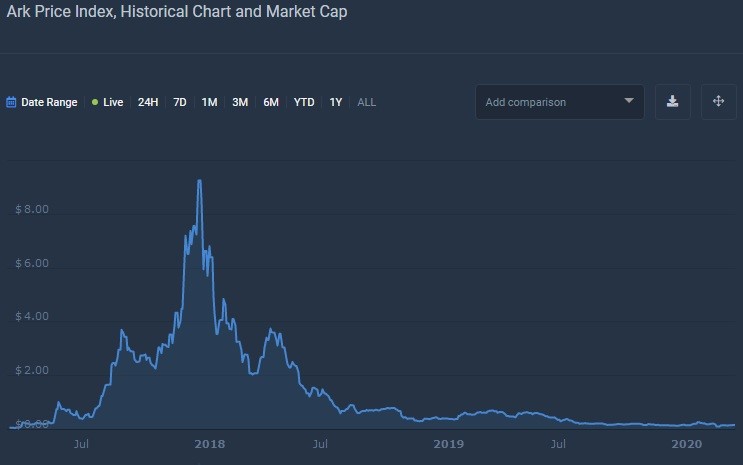 What's notable about Ark back then was that the price formed a picture-perfect head-and-shoulders pattern that should have warned traders about the imminent demise of coin's value. Nevertheless, the early investors must be satisfied with currency's showings as it still provides them with 1,172% all-time ROI, a rare feat for a coin of this rank.

Fundamentally, ARK doesn't offer any groundbreaking solutions: it represents an ecosystem that consists of interoperable blockchains that are supposed to be superior to others in terms of speed, scalability, and security. Sounds good on paper, but, apparently, a relatively small market capitalization of $22,9 million is the primary reason why there isn't much going on with regard to ecosystem development.

Nevertheless, the coin is being traded actively on three major cryptocurrency exchanges: Upbit, Binance, and Exrates, with ARK/BTC being the most popular trading pair. The average daily trading volume fluctuates between $500 thousand to $2,4 million, spiking to $12 million on rare occasions.

All in all, ARK is not the cryptocurrency that is worth including in the investment portfolio at this stage of the project's development, but it represents a decent way to scoop up some Bitcoin while trading in the corresponding pair.

As we have already mentioned, every once in a while, ARK experiences massive but short-term influxes of liquidity, which ultimately push its price against Bitcoin to extreme heights. What's also interesting is that that volume is always around $12 million per day, which leads us to the conclusion that a whale, in other words, a manipulator, is operating in this market, forcing the price to skyrocket. 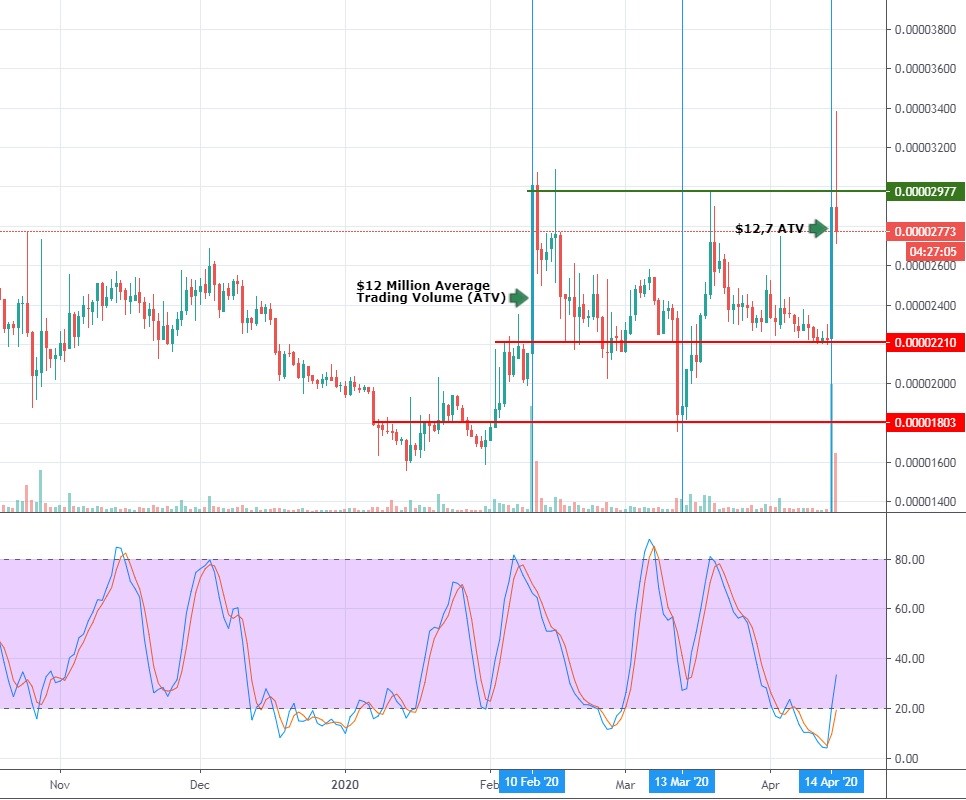 But we, traders, aren't here to condemn the occurrence that is common for the cryptocurrency market. On the contrary, it is our task to find these patterns and exploit them to our advantage. When it comes to Ark, we have noticed that the most intense price action, accompanied by the uncharacteristically large volume, occurs in the middle of each month - between 10th and 14th, to be more precise.

In these short periods of time, the price of ARK receives a boost by 70% or more and then collapses to the area of support at 22 thousand satoshis or 18 thousand sats, depending on how aggressively the whale wants to shake up the market. Make a note of the fact that the crossover on Stochastic has proven to be a useful tool for determining the beginning of the price swing. Also, ARK has a very distinctive resistance level at 29 thousand sats, though its upper wicks could travel much higher.

To summarize, if you want to make some Bitcoin next month, wait for ARK to retrace to the said support, buy an affordable amount, set the profit target, and wait for the whale to swim into the market.