An average trader rarely checks the coins that are below the Coinmarketcap’s top 50 or even 30. However, those who do are rewarded with the opportunity to profit from trading such underrated gainers as Ardor (ARDR).

Although the year 2019 hasn’t been much too impressive for ARDR in terms of gains, as its largest one amounted to 2.5% against the US Dollar, while Bitcoin, understandably, had overpowered the underdog by as many as 62.2%.

Nevertheless, Ardor began the new calendar year very confidently as for the coin that has a market capitalization of mere $51 million and an average daily trading volume of $2.5 million, by going all-green against the three major currencies over the period of the last 7 days: 22% in the ARDR/USD pair; 8.87% on the BTC market, and 7.19% against Ethereum. Not a bad showing for the 88th placed cryptocurrency that isn’t making any news headlines.

The fundamental value of ARDR

Fundamentally, Ardor is a blockchain ecosystem that utilizes that Proof-of-Stake consensus algorithm and has an interesting architecture that is comprised of a parent Ardor blockchain and multiple “child” chains with broad functionality. The chief purpose of Ardor is to resolve the issues such as a blockchain bloating, scalability, and the excessive reliance on a single token within the ecosystem. These are the burning problems of the contemporary blockchain industry, which Ardor might be solving covertly yet efficiently since there is positive price action on the part of the ARDR coin.

When we mentioned the meticulous traders, who are capable of digging out profitable coins from the piles poorly-performing ones, we also meant those who aren’t refraining from trading on such relatively exotic cryptocurrency exchanges as Bilaxy, which currently accommodates more than 60% of ARDR’s entire trading volume. But it doesn’t mean that Ardor has the proclivity for pumps-and-dumps, though there had been a couple of situations similar to that scheme. 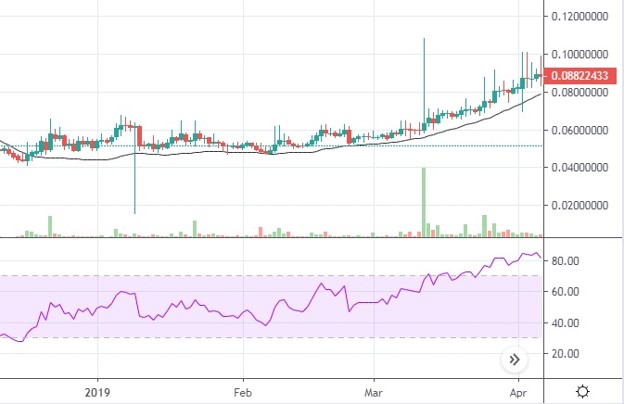 The first one occurred on January 9, 2019, when the price dropped by 73% and got pushed up in a matter of a day; the second instance took place on March 12 - the price shot up by 87% only to drop back in a few hours. Although these instances are rare, please keep them in mind as one such rise/drop could trigger your stop-loss and throw you out of the market for good. But for the time being, ARDR is a profit-generator for those traders who are engaged in the ARDR/USDT market and prefer the daily time frame. 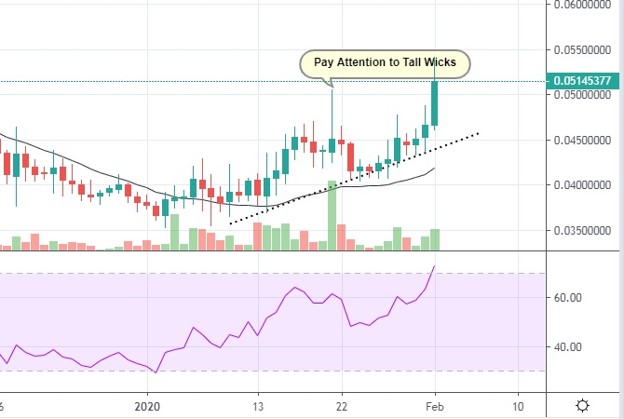 Since the first week of January, Ardor has been doing an excellent job at respecting the 50-period moving average, which means that the market possesses enough strength for a prolonged upside movement. But traders should be careful when placing their stop-losses because judging from the height of the wick on almost every daily candle, the market is quite volatile, meaning that poorly placed stop-losses are triggered frequently.

Nevertheless, the price of ARDR has been moving in a slow but steadily rising fashion, obediently making higher lows, now being in the process of establishing the second higher high at $0.051. Given that the RSI is currently in the overbought region, we could see the retracement of Ardor to a level above $0.045 with a subsequent move to the upside. To summarize, ARDR tempts traders to go long since the market appears to be developing healthily.