Unfortunately for its holders, Algorand couldn’t escape the fate of the whole cryptocurrency market, which took a deep dive on the day that turned out to be the third biggest crash in its history. But this shouldn’t have come as a surprise for traders who have the knowledge of basic trading patterns. In that case, we have been witnessing the emergence of the head & shoulders reversal formation that had been building up for the duration of the last three months. 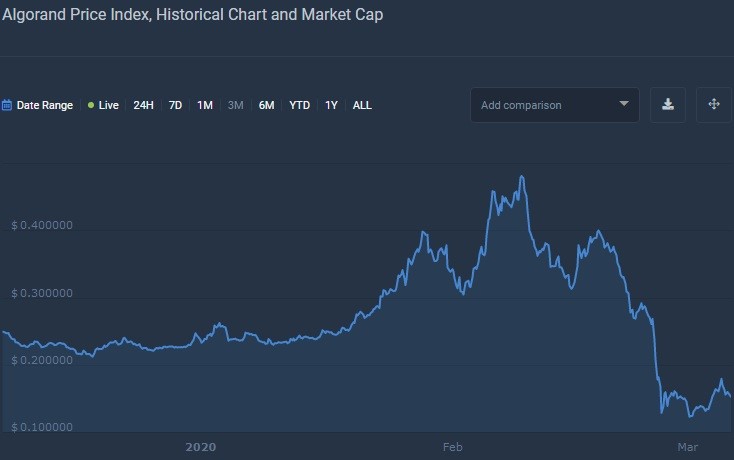 ALGO price action over the past ninety days

Certainly, no one could have anticipated such an extremely abrupt price degradation, which amounted to 65% in just two days, but the seasoned traders must have placed stop-losses wisely, which helped them avoid losing a big chunk of capital and even buy back substantially more ALGO once the price reached the all-time low at $0.105 on March 13, the second day of the crash.

Those who weren’t foresighted enough are now forced to wait for the crisis to pass or devise trading strategies that could somehow help to cover the massive losses, at least partially.

But perhaps not a single strategy could be of any help to those who acquired ALGO in the first days after its listing on cryptocurrency exchanges, which happened in June 2019, when the price had leaped to it’s all-time high at $3.56, which is 96% from its current price of $0.153, as of the time of writing.

ALGO stands at the crossroads

After the two dark days of the market meltdown, Algorand followed the footsteps of other cryptocurrencies, which had made a partial recovery. When it came to ALGO, this recovery constituted around 20% - speaking in plain numbers, it went from the mentioned low at $0.105 to $0.1685 in a span of one day, whereupon it went into a tedious consolidation phase, trading in the range between $0.1288 and $0.1668. 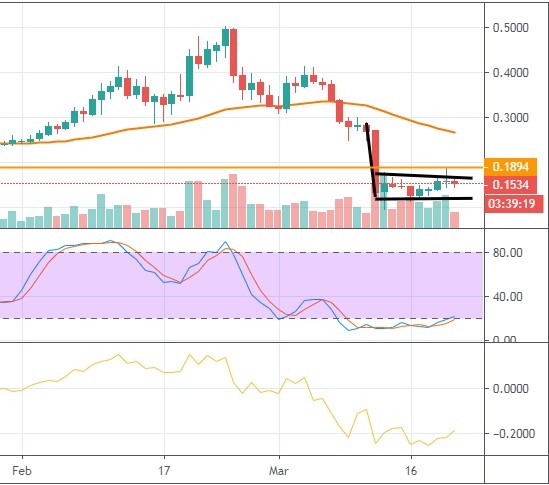 All in all, we see a classic bearish flag formation on the daily time frame, which appears to be striving to resolve to the upside. This conclusion was made on the basis of Stochastic, which has finally made a bullish crossover and appears to be exiting the oversold region and passing the -25 line. Although one shouldn’t expect this move to be of a strong kind since the momentum oscillator has barely touched -0.2, while ATR is still at the extreme lows.

Therefore, if the upward move does occur, it shouldn’t take ALGO higher than the top of the upper shadow on a previous daily candle, which touched the level at $0.1894 that also served as firm support from September till December of 2019. 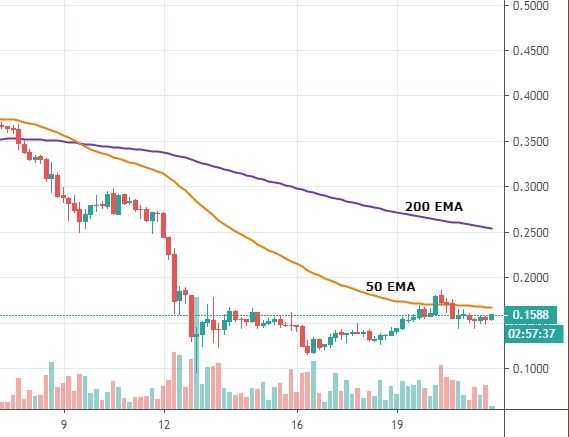 The 4-hour time frame reveals that there’s also not much going on with ALGO apart from it closely approaching the 50-period EMA but ultimately failing to turn it into a support line, which could have given traders hope at the looming bullish phase.

But even if the breakout does occur, it is likely to stumble upon a tough resistance between $0.185 - $0.2 and then go bouncing off the 50 EMA. However, a piece of single news about the new wave of coronavirus pandemic could crash the price of ALGO, and all other cryptocurrencies, back to the all-time low, and beyond, in a matter of hours - that’s just the reality we are living in right now.