In our previous Algorand (ALGO) price prediction article, we advised you to see how the market dealt with the bullish flag pattern before entering any trades, and that the descent to $0.47 would mean that the pattern was being resolved to the downside.

The 49th cryptocurrency decided to embark on the path to the downside being driven by the insurmountable selling pressure that the entire market had encountered in September. All these occurrences took ALGO down from the all-time high at $0.68 to the present price level at $0.3, marking the 65% price decrease in just 40 days and the ultimate ruination of two support levels at $0.49 and $0.39.

ALGO is locked in the range - for now

The daily chart below shows that ALGO is only a few steps away (16% to the downside, to be precise) from completely eradicating all gains made during the summer months, which means that the buyers that back the coin that acts as a key component of the blockchain network that has the Pure-Proof-of-Stake consensus algorithm at its core, are now grasping at the last straw in their effort to save what’s left of the uptrend structure. 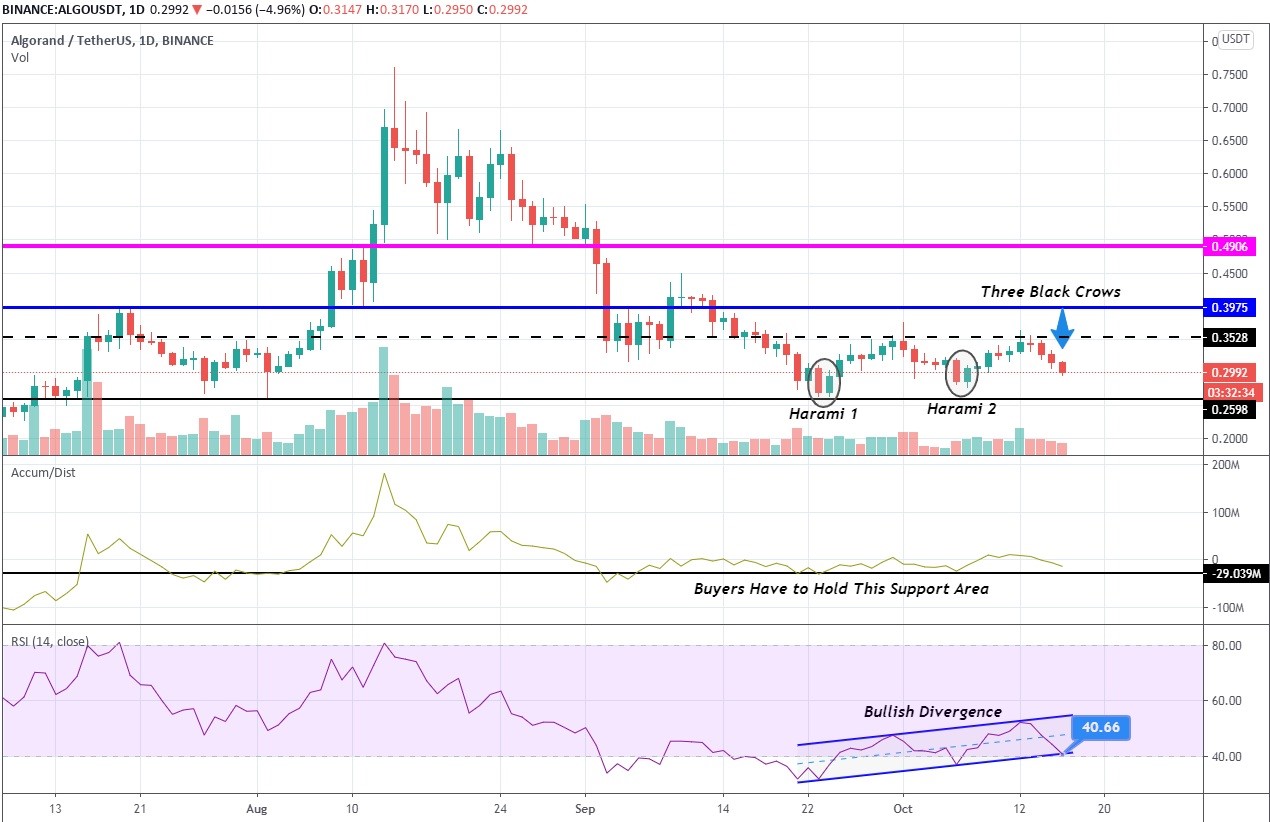 Right now, it’s clear that after finding the support at $0.26, the buyers are making weak efforts to force the recovery to $0.39, though both of them couldn’t achieve price appreciation greater than 20% and failed at $0.35, which makes it a tough point of resistance that might well form the framework for consolidation channel or even become a rejection point from which the price would travel farther south.

We see that the last two efforts to reverse the downtrend had a similar pattern where the impulse to the upside began with a bullish candlestick pattern called bullish harami, but both these short rallies ended being rejected at $0.35.

After the second rejection, we could have said with a good degree of confidence that ALGO is creating a consolidation corridor for itself, but now the outlook is shifting towards bearish since we clearly see the formation of the bearish candlestick pattern dubbed three black crows that could lead to a far greater price depreciation than seen during the previous retracement from $0.35 to $0.27. This outlook is also being supported by the showings of two key indicators.

All in all, Algorand is now at the crossroads, but it seems that it has already made the first step on the road downhill that could lead the price to $0.22 - $0.2.