Algorand (ALGO) is your typical altcoin that has seemingly useful fundamentals, which even find application in the real world, but the overall demand for the coin remains sub-par.

For instance, according to the recent news, the blockchain protocol developed by the team behind Algorand has attracted the attention of the Iceland-based fintech company called Monerium, which is actively involved in the issuance of digital money. So much so, that the firm wants to develop its new iteration of electronic money, that is likely to be conceptually similar to stablecoins, on the basis of the ALGO blockchain protocol.

PlanetWatch Group is another organization that has recently announced its partnership with Algorand. This particular company deals with environmental protection through the development of software that collects data related to weather conditions around the world. A couple of days ago, PlanetWatch informed the public through the official press release about the all-encompassing incorporation of the Algorand blockchain into their system for monitoring the air quality.

This news, however, didn’t hit like a bombshell with regard to the overall price action of ALGO. Frankly speaking, it hasn’t been doing exceptionally well during the last 30 days, gaining only 2% against the US Dollar and being weaker by 12.7% than Bitcoin. Also, the fact that Algorand is being traded mostly on two cryptocurrency exchanges - Hotbit and Bilaxy - doesn’t facilitate its popularity among traders, as coin’s average daily trading volume constitutes a mere $30 million. But despite not being a part of the cohort of cryptocurrency superstars, ALGO is still worthy of keeping an eye on, mainly because of its decent fundamentals that could translate into fairly good gains in 2020.

Staying at the bottom

Those who have been following Algorand since the time of its listing on the exchanges know that the debut of the 44th cryptocurrency was disastrous, as its price had taken a nosedive almost immediately after being made available for trading. 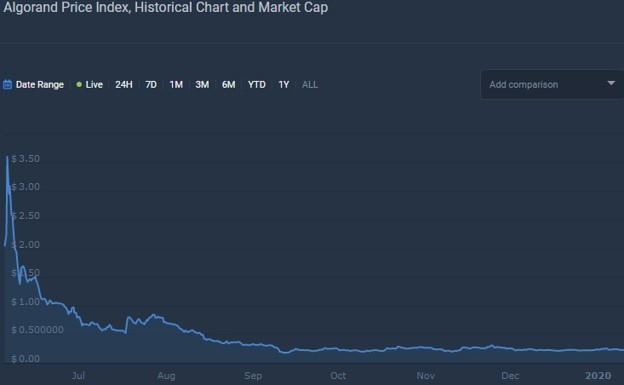 In a span of 5 days, ALGO had reached the all-time high of $3,6 and then crashed to $1,65, leaving those who weren’t wise enough to sell at the top with less than half of their initial investment. To make matters worse, the price of the coin kept moving down the slope until it reached the current correction corridor between $0.2 - $0.3. 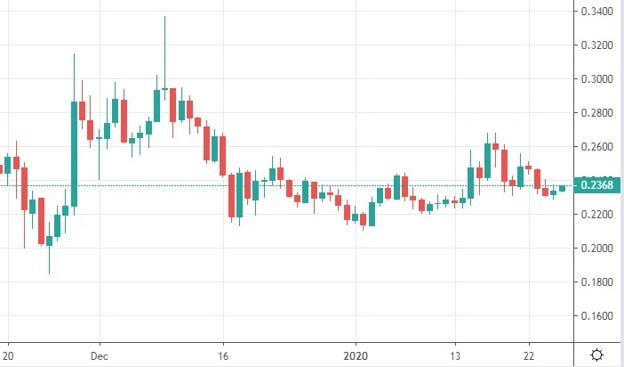 On the one hand, Algorand isn’t the kind of coin that could be traded on breakouts, since there hasn’t been any, but, on the other hand, it could be a suitable one for occasional scalping.

But if we move to a smaller time frame, like the 4-hour one, we will see that ALGO tends to be quite volatile there, with 12% to 66% price swings happening on a regular basis. But even then, the price stays within the designated corridor, although recently, it has been narrowed down to $0.21 - $0.25. 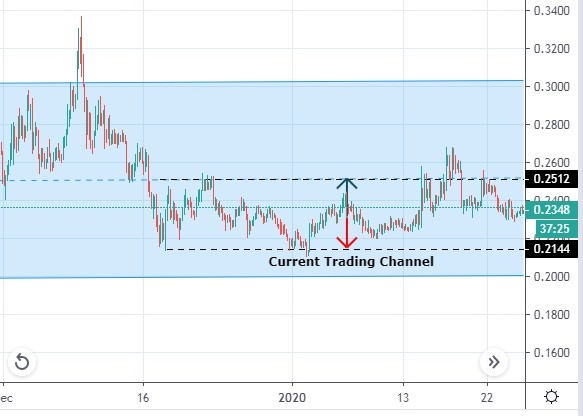 In conclusion, the partnerships, mentioned at the beginning of the article, might exert a positive impact on the price of Algorand in the near future, but it is unlikely to surpass the resistance at $0.32. Although, it is also highly improbable that ALGO would dip below $0.2, which serves as a good prerequisite for short-range trading.