The reality of the crypto trading and investment is that people who have devoted a mere $10 to LEND a year ago could be now walking away with a hefty sum of money as the DeFi token has risen in price by the phenomenal 16,450%, making this altcoin the undisputed gaining champion as its closest rival ThorChain (RUNE) has had the price appreciation of 4,700%.

Aside from the monstrous gains, Aave has been dominating the realm of decentralized finance lately - according to the latest data, the blockchain project behind LEND now boasts nearly $1.5 billion locked in its digital assets, slightly beating the trailblazing Maker (MKR) that secured $1.42 billion. The important thing is that Aave is not dealing with yield farming, which is widely believed to be the bubble that is going to burst in many people’s faces, but instead offers an extensive range of crypto assets for depositing and borrowing purposes.

Another positive news for LEND came from the United Kingdom, where the UK Financial Conduct Authority granted the company the immensely important Electronic Money Institution license, which is undoubtedly the landmark event that has also triggered yet another bull rally on the part of LEND. This time around, the DeFi token surged another 40% and established a new all-time high at $0.89 that was followed by the 16% pullback that you can see on the 1-month chart below. 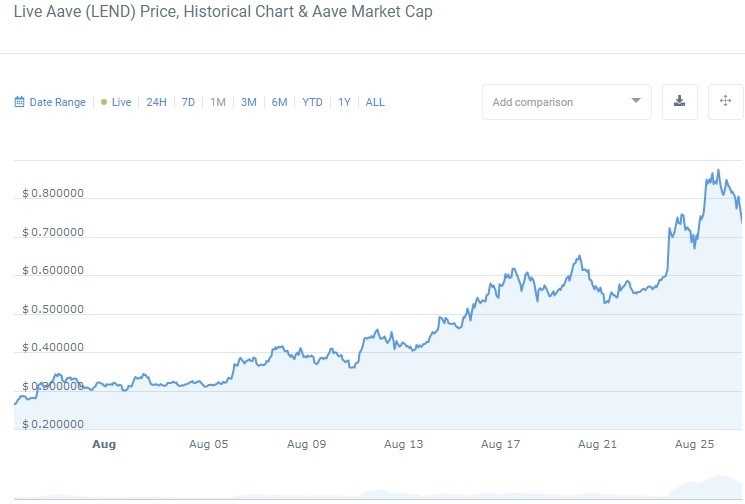 In our previous Aave price analysis, we have correctly foreseen the retracement to the support level around $0.2 after the dark cloud candlestick pattern. Upon the bounce off the support, the price went on an almost uninterrupted bull rally that took LEND to the mentioned ATH.

Right now, we see that the sellers are applying strong pressure, having pushed the price down to the close of the candle that had initiated the last bullish move, which still works as a healthy retracement with very distinctive prospects for the continuation of the uptrend if the buyers will keep the price from falling below $0.72, thus confirming a narrow retracement. 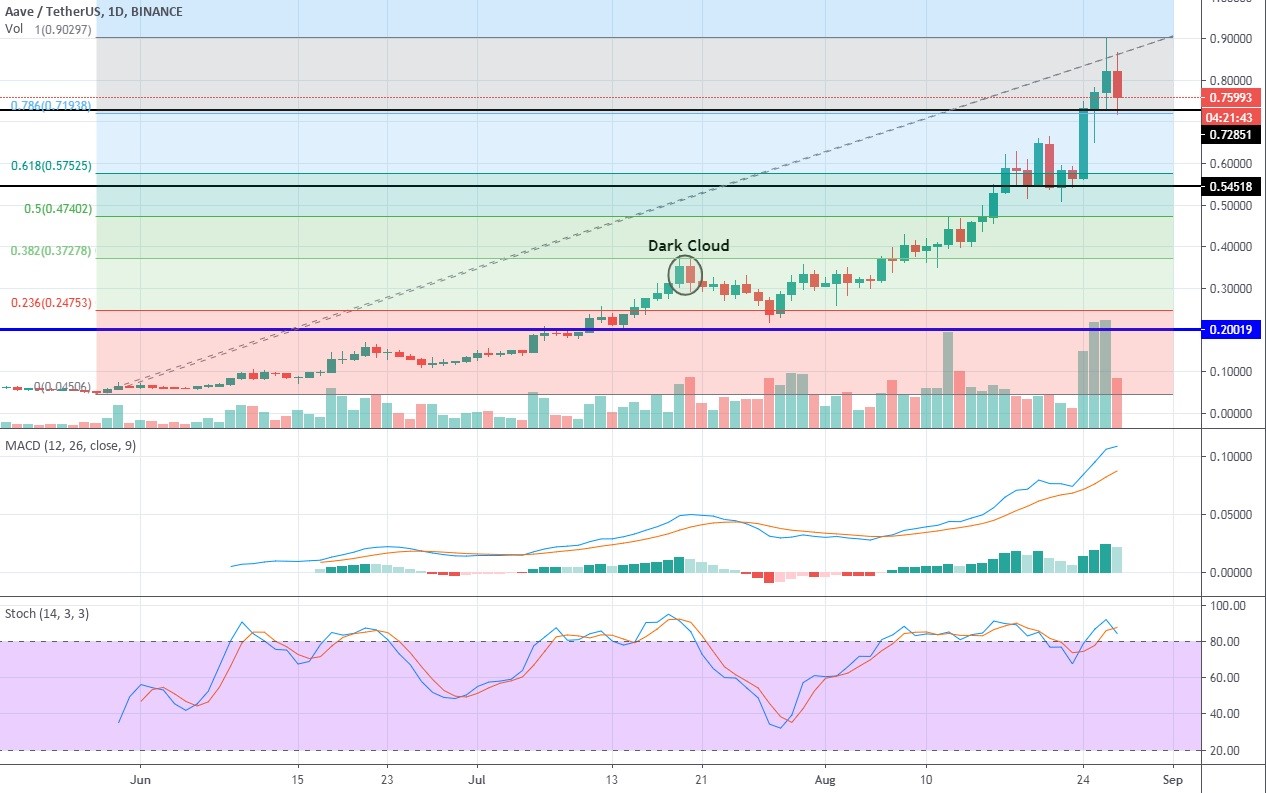 We see that the established resistance coincides perfectly with the 0.786 Fibonacci extension level that enhances the capabilities of $0.72 as the support, which gives the bullishly-oriented traders hope that the uptrend will persist without a deeper pullback. The indicators and the trading volume, however, dictate that the price depreciation might be a bit more profound, possibly even below $0.6 to the 0.786 Fibo extension, which would be the last outpost for the buyers to maintain the proper uptrend structure.

Once again, keep a close eye on LEND’s behavior near $0.72 as it will signal whether the uptrend is still strong, or that the buyers are worn out, and its structure will start to crumble.