0x (ZRX) - an open-source protocol that serves specifically for the Ethereum blockchain infrastructure comprised of smart contracts - wasn’t doing particularly well recently in the profit-making department as its price has made only a short 23% sprint to the upside, on its road to recovery after the notorious Black Thursday that had completely wiped out its gains from the beginning of 2020, leaving those who purchased this coin a year ago 33% short of its original price.

However, those who added 0x to their portfolios in 2019 should have taken into account the fact that it has been existing - and still exists - in the context of a macro downtrend that had only gotten more profound after the emergence of the double top pattern in the period during May and June of 2019. 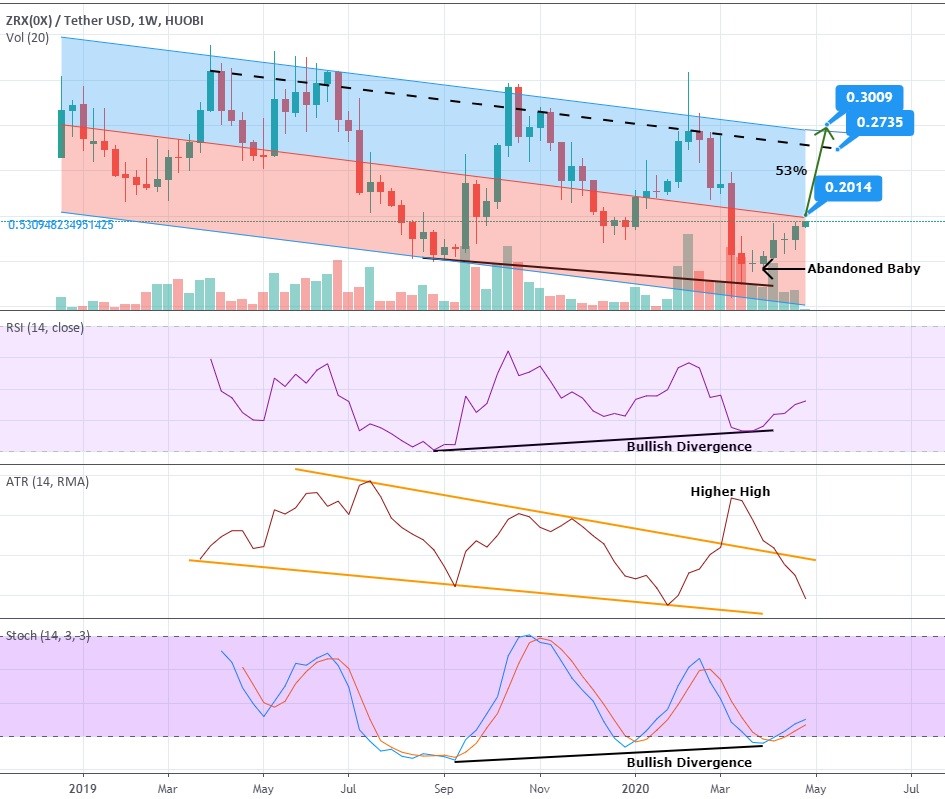 Upon that, the regressing trend had only accelerated as ZRX began making deeper lower lows, the last of which coincided with the so-called Coronavirus Crash when the currency had lost 51% of its value in just two days.

This fact alone could have sent traders and investors alike into a mode of total frustration, but later, a glimmer of hope appeared in the form of bullish divergence on the 14-period RSI that stretches all the way from last August till mid-March.

The divergence alone is not the ultimate buying signal, but in this case, it is supported by the bullish abandoned baby pattern - these two combined give the reason to believe that 0x will eventually make an attempt to free itself from the bearish shackles.

The Average True Range indicator also hints at the underlying shifts in the market as it has broken the descending wedge to the upside and made the first higher high. This fact alone doesn’t point at the inevitability of the bullish period, but if it does happen, the increasing volatility, displayed through ATR, will work in its favor.

Stochastic also displays a bullish divergence, although not as prominent as on RSI. Nonetheless, it still works towards the general notion of the approaching bullish phase.

The very same Stoch shows that 0x might soon bump into a resistance at $0.2, which we have set as the first price target because the %K line of that oscillator is inclined to cross under the %D line, which doesn’t leave a lot of room for the price to go upward. Thus traders should prepare for the coming retracement.

Once the retracement plays out, ZRX will pass $0.2  and then should have an immediate price appreciation to the next price target at $0.27, which is another interim resistance level, upon reaching which the price might get rejected or it could make another forceful dash and pierce $0.3, which would become a climax of a 53% upside move.

However, even such a respectable price gain would still keep ZRX within the framework of the descending channel. In order to give the bullish-minded traders hope of a trend reversal, 0x needs to consolidate itself above $0.3 and start aiming for the area around $0.4.

Right now, this scenario might seem a bit tough to realize, especially for a coin with an unspectacular trading volume that fluctuates between $11 million and $29 million. But if we take into account the increasing hype around the approaching Bitcoin halving, which already pushes the entire market upward, the scenario where ZRX makes a concrete attempt at reversing the downtrend seems feasible.